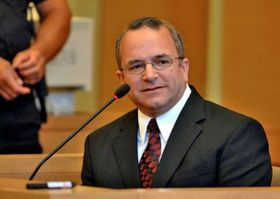 The investigation also revealed that Catalano and others arranged for HESC to pay $7,150 in collection costs for its employee, Brian Cox, and that another HESC employee, Donald Traver, illegally blocked the transmission of $1.25 million in HESC collection accounts to private companies to "save" state worker jobs.

Catalano, 54, of Delmar, told the Inspector General that he became friendly with McDermott while testifying at the 2006 murder trial of Christopher Porco. Several months later, McDermott telephoned Catalano, seeking help with delinquency payments on his student loan. From 2007 to the present, HESC reduced McDermott's monthly payments from $1,030 to $400, in direct violation of federal requirements. Later, when McDermott repeatedly failed to pay the $400, HESC cancelled his $2,111 in collection fees and continually protected him from having his wages garnished.

Although McDermott, the former Chief Assistant District Attorney for Albany County, has been in default on his student loans since 1991, he was not legally entitled to any relief benefits, the report states, because he provided no proof of financial distress and, in fact, did not reveal that his six-figure income had actually risen by 36 percent in 2007 and by 70 percent in 2009. HESC employee Dantaida de Guzman, a close work friend of Catalano, testified that McDermott told her he had financial hardship. She added: "He's a district attorney, I think I'd be able to trust him."

"This is a classic abuse of power and is all the more disturbing because it involves a former prosecutor and a trial witness," Inspector General Joseph Fisch said. "Each month, HESC garnishes wages for more than 27,000 accounts. Mr. Catalano exempted Mr. McDermott from this penalty at taxpayer expense. Students and their families who struggle, yet manage to pay off such loans, have the right to be outraged at this display of unconscionable favoritism involving public officials."

HESC Acting President Elsa Magee said: "HESC takes extremely seriously its obligations as a guarantor in the Federal Family Education Loan (FFEL) program, and will pursue appropriate disciplinary action against all employees as recommended by the Inspector General."

In addition, Fisch's report found that:

Inspector General Fisch recommended that HESC take disciplinary action against Catalano, de Guzman, Cox, Traver and two other employees and that HESC seek recovery of the waived or reduced payments from McDermott and Cox. He also forwarded his findings to the state Attorney General's Office and the state Commission on Public Integrity for review.