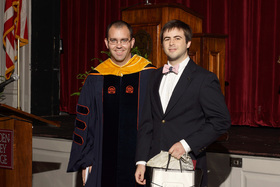 HAMPDEN-SYDNEY, VA (05/10/2013)(readMedia)-- At Final Convocation on April 25, Hampden-Sydney College junior James Bradford Hughes received the H. B. Overcash Award, presented by Dr. Kristian M. Hargadon '01, Elliott Assistant Professor of Biology. This award is given to a premedical student to honor the memory of Professor of Biology H. B. Overcash, a much respected and revered teacher.

A Madison Scholar, James serves as Treasurer of the Pre-Health Society, the InterVarsity Christian Fellowship, and the professional scientific fraternity Alpha Chi Sigma. He is a member of the honorary societies Phi Beta Kappa (academics) and Chi Beta Phi (science) and was the recipient at Opening Convocation in September 2012 of the Samuel S. Jones Phi Beta Kappa Award. A biology major, James graduated from Saint Andrew's School and is the son of Drs. Brian & Amy Hughes of Savannah.

A private college for men, Hampden-Sydney is ranked in the top tier of liberal arts colleges by U.S. News & World Report. The College is known for its liberal arts curriculum, the Honor Code which stresses individual and collective responsibility, and a focus on the education of young men.