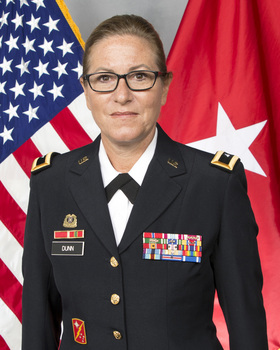 "Congratulations to Brig. Gen. Dunn on her selection. It's a terrific opportunity for her, and she will represent Maine well," said Maj. Gen. Douglas Farnham, Maine's adjutant general. "Diane is an experienced commander and staff officer who will no doubt excel in this challenging environment where ARNORTH is playing such an important role."

"I am honored to congratulate Brig. Gen. Dunn on this national assignment," said Gov. Janet Mills. "Her selection is a testament to her vast experience in strategic and exercise planning and is another example of Maine's contributions to our national defense. I am proud of her and thank her for her work and service."

U.S. Army North is a component of U.S. Northern Command, and serves as the Army's headquarters for operations within the homeland. It also houses an important liaison environment between the Title 10 active Army and the Army National Guard, which falls under Title 32. The two components' relationship is a critical one, given the National Guard's dual state and federal missions.

"I'm honored to have this opportunity to serve at the national level in a position that directly supports all 54 states and territories, their governors, and their citizens," said Dunn. "Especially at a time when the National Guard is such an integral partner."

Dunn's new position is primarily focused on defense support to civil authorities, or DSCA, a type of military operations where warfighting capabilities and equipment are brought to bear to aid federal, state and local governments during domestic emergencies and disaster relief efforts. This is a temporary duty assignment in addition to her current position.

Prior to her assignment as assistant adjutant general, Dunn was the chief of staff for the Maine Army National Guard, which followed a two-year assignment as the commander of the 120th Regional Support Group in Bangor, one of the two major commands in Maine. In 2009, she commanded the 286th Combat Sustainment Support Battalion on a deployment to Afghanistan in support of Operation Enduring Freedom.

Additional information on U.S. Army North can be found at www.arnorth.army.mil.