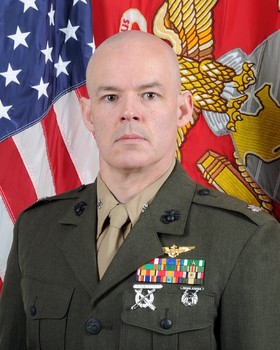 Members of the press are invited to cover the ceremony within COVID-19 social distancing guidelines.

Marine Aviation Logistics Squadron-49 is a Marine Corps Reserve unit that flies the KC-130 refueling aircraft and provides logistics and maintenance support to other aviation units.

Oliver is a 2000 graduate of the United States Naval Academy. He flew F/A-18s during his active duty service and joined the Marine Corps Reserve in 2012.

e flew KC-130 as a member of Marine Aerial Refueler Transport Squadron 452 from 2014 to 2016. He is currently the operations officer for the Marine Corps Reserve's Readiness Support Programs in New York City.

In civilian life he is a graduate of the MIT Sloan School of Management and is currently director of Government Affairs and Corporate Responsibility for Wayfair, an online shopping company.

Members of the press who wish to cover the change-of-command ceremony must contact New York Air National Guard Master Sgt. Sara Pastorello by email at sara.pastorello@us.af.mil no later than 5 p.m. on Thursday, April 15to obtain access to Stewart Air National guard Base.

Media will need to provide information ahead of time for access to the installation as well as provide two forms of photo identification when entering the base.