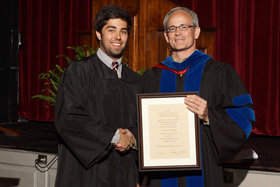 A Patrick Henry Scholar, Matt serves as a Resident Advisor, as President of the Baptist Collegiate Ministry, and as Vice-President of the Outsiders Club. He is a member of the Pre-Law Society and the Inter-Varsity Christian Fellowship. An English major, Matthew graduated from Patrick Henry High School and is the son of Kenny & Amy Boschen of Ashland.

A private college for men, Hampden-Sydney is ranked in the top tier of liberal arts colleges by U.S. News & World Report. The College is known for its liberal arts curriculum, the Honor Code which stresses individual and collective responsibility, and a focus on the education of young men.