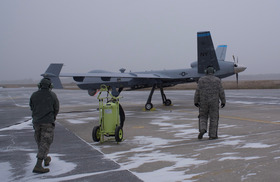 Members of the 174th Maintenance Group prepare to taxi the first Block 5 MQ-9 Reaper on February, 12, 2019 at Hancock Field Air National Guard Base in Syracuse, N.Y.

That 60,000 hour figure isn't like the odometer turning over in a car, explained Air National Guard Maj. Elliot Sanders, the Assistant Director for Operations for the squadron. It represents a lot of time and effort by many Airmen, he emphasized.

"Each of those hours requires a team of ten or so people -pilots, sensor operators and intelligence coordinators- actively engaged in close air support or reconnaissance over watch," he said. "In other words, those hours are spent supporting the warfighter on the ground."

The 138th has been flying combat missions almost continuously -seven days a week, 365 days a year- since 2009, Johnson said.

That is the equivalent of twenty or thirty thousand sorties conducted by conventional manned fighters, he added.

The MQ-9 Reaper is what the Air Force calls a remotely piloted aircraft. The 36-foot long aircraft, with a 66-foot wingspan, is controlled via satellite link by a pilot and sensor operator located at Hancock Field Air National Guard Base.

The flying hours also represent the ongoing work of maintenance personnel at air bases around the world who provide ground support for the aircraft controlled remotely by the US based aircrews, Sanders explained.

The MQ-9 can find enemy forces or individuals, track them on the ground, and attack if required, using a Multi-Spectral Targeting System, which includes an infrared sensor, TV cameras which can track objects miles away, and a laser rangefinder and target designator.. The aircraft is armed with Hellfire missiles and satellite guided bombs to strike targets on the ground.

In fiscal year 2020 the Air Force maintained 70 MQ-9 combat air patrols over American and allied forces operating throughout the world. National Guard Attack Wings like the 174th Attack Wing and the New York Air National Guard's 107th Attack Wing, based in Niagara Falls, N.Y., flew 20 percent of those missions, according to the National Guard Bureau.

The 138th Attack Squadron traces its history back to 1947 when it was organized as fighter squadron, flying World War II-era F-47D fighters and charged with defending northern and central New York from attack. In 1950 the unit switched to jets fighters and continued to upgrade to new aircraft.

The wing flew combat missions during Operation Desert Storm and in 2001, F-16's from the 174th were some of the first fighter jets scrambled after the September 11th attacks on the World Trade Center.

"We were the first Guard unit to fly Reapers," said Johnson. "We're still doing it to protect our families from terrorist threats that train in ungoverned parts of the world."

"I have an immense sense of gratitude to all the Air National Guard men and women, and the civilians and contractors of the 174th Attack Wing that enable us to continue doing our part, Johnson said.