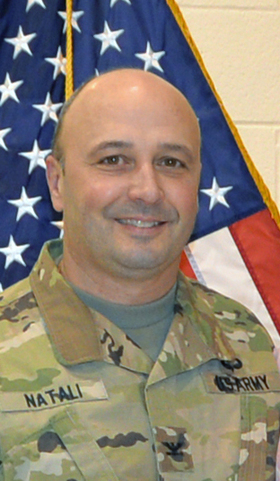 The 53rd Troop Command, located at Camp Smith Training Site near Peekskill, is responsible for military police, transportation, supply, engineer, and other Army National Guard support units located across New York. There are about 4,000 Soldiers in these units.

Natali deployed to Iraq with the 42nd Infantry Division as Deputy Intelligence Officer in 2005.

He has also served as an Active Duty Guardsman as Assistant Chief of Staff for Intelligence for the 42nd Infantry Division and as the Commander of the New York National Guard Counter Drug Task Force.

He served on active duty assignments that included command of Headquarters Company of the 110th Military Intelligence Battalion and Intelligence Collection Manager for the 10th Mountain Division Intelligence Section at Fort Drum, N.Y.

"Col. Mike Natali is a proven leader who has demonstrated his ability to lead. He understands both the federal and state missions of the National Guard and is the kind of officer we want serving as a general ," said Major General Anthony German, the Adjutant General of New York.

Natali was commissioned into the Military Intelligence Corps in May 1987 after receiving a Reserve Officers Training Corps Commission at Norwich University in Northfield, Vermont.

While serving with the 10th Mountain Division Natali deployed to Haiti supporting Operation Uphold Democracy, to Somalia in support of Operation Restore Hope and to South Florida as part of the military response to Hurricane Andrew.

Natali holds a Bachelor of Arts Degree from Norwich University, a Masters in Public Administration from Marist College and a Masters of Strategic Studies from the United States Army War College.

Natali, the son of Franco and Giuseppa Natali, grew up in Watertown and is a 1983 graduate of Immaculate Heart Central High School.

Natali and his wife Barbara have three sons and two daughters.