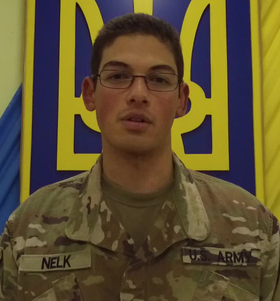 Nelk, age 21, was assigned to the 2nd Battalion, 101st Cavalry Regiment, of the 27th Infantry Brigade Combat Team. The incident is currently under investigation.

Nelk was one of 220 New York Army National Guard Soldiers assigned to the Joint Multinational Training Group-Ukraine, who are responsible for assisting in the training of Ukrainian Army troops at the Yavoriv Combat Training Center. The Soldiers mobilized in October and took over the mission from an Oklahoma Army National Guard team on Nov. 22.

Nelk enlisted in the New York Army National Guard in March of 2015. He completed his Advanced Individual Training in January of 2016 and was assigned as a Cavalry scout.

His awards are the National Defense Service Medal and the Army Service Ribbon.