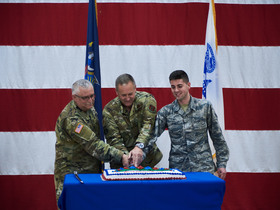 Members of the press are invited to cover the socially distant event.

Members of the media interested in covering this event must contact the Division of Military and Naval Affairs Public Affairs Office at 518-786-4581 for access to this secure facility.

He enlisted in the New York Army National Guard in 1982 while he was in between college classes. He served in the 1st Battalion, 107th Infantry in New York City and was also earned the military occupational specialty of computer analyst.

During the course of his career he has served in logistics units and signal units.

Glorius was part of the New York National Guard response to the attacks of Sept. 11, 2001. In 2011 he deployed to Afghanistan with the Army's 3rd Infantry Division and helped to operate a regional communications network control center.

Along with serving in the 1st Battalion, 107th Infantry, Glorius served in the 369th Sustainment Brigade, the 42nd Infantry Division and the 107th Corps Support Group.

He has been awarded the Bronze Star, the Meritorious Serve Medal, the Afghan Campaign Ribbon, and the National Defense Service Medal.