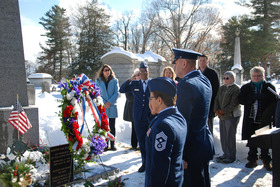 WHAT: Annual recognition of former President Martin Van Buren, a Columbia County native who died on July 24, 1862 in Kinderhook, N.Y. He was born on Dec. 5, 1782. Bank will present a wreath sent by President Donald J. Trump. Traditionally a wreath from the sitting president is laid at the graves of former presidents on their birthdays by military officers.

Van Buren was the first president born as an American citizen rather than a subject of the British Empire. A historical marker on Kinderhook's Hudson Street indicates the site of the Van Buren family tavern, where the president-to-be was born in 1782. He's buried in the family plot at the Kinderhook Reformed Cemetery. Van Buren served in the White House from 1837 to 1841.

His home, Lindenwald, is a national historic site