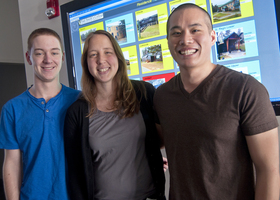 PAUL SMITHS, NY (02/13/2013)(readMedia)-- Students at Paul Smith's College have a new tool to see just how much impact their energy conservation efforts are having: networked electricity meters that illustrate how much power is being used in their residence halls every moment of the day.

The meters have been installed in all 15 residence halls on campus. A 55-inch television screen in the Joan Weill Student Center displays the energy updates in real time. Eventually, the information will be available on the Web.

Jon Buyl, a junior majoring in environmental studies who co-wrote the proposal, said the meters are meant to show that changes in behavior can make a big difference in how much electricity is used on campus.

To drive the message home, students will compete to see which residence hall can reduce electricity use the most over a four-week period starting February 25. The winning building will get first crack at next year's housing lottery, as well as other conservation-related prizes.

"Effective energy-conservation campaigns should engage the community and raise awareness," said Katharine Glenn, the campus' sustainability coordinator. "This competition is the first step."

Glenn is hoping students see that when they shut off the lights when they leave a room, or open their blinds during the day to let sunlight add some warmth in winter, it makes a difference.

The $43,000 project was paid for by the college's Campus Sustainability Fund, which supports environmentally friendly projects suggested by students. The fund is staked with a $26 fee paid yearly by every student.

Students themselves voted to establish the charge three years ago. Other projects that have been backed by the fund include the purchase of composting equipment and software to cut the use of printers and paper in the library, and the development of a community vegetable garden.

The sustainability fund is one of several steps Paul Smith's has taken to maximize its environmental efficiency: All new buildings on campus are being designed to meet LEED standards, for example, and all electricity use on campus is offset by the purchase of renewable energy credits.

Buyl, who co-wrote the proposal with Office of Residence Life Area Coordinator Roger Wang, said other campuses that have installed similar systems have seen an impact. "It is changing people's behaviors," he said. "All the things that people were doing were paying off."

At Paul Smith's College, it's about the experience. Our programs, in fields including hospitality, culinary arts, forestry, natural resources, entrepreneurship and the sciences, draw on industries and resources available in the Adirondacks while preparing students for successful careers anywhere.