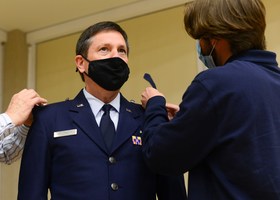 "Ken has been a fixture in all facets of the Maine Air National Guard's legal matters going back over 25 years," said Brig. Gen. Frank Roy, Maine Air National Guard Chief of Staff. "He has provided sound legal advice on very sensitive matters with the upmost professionalism and candor. With this promotion, he accepts new responsibilities that we are confident he can carry out."

During the promotion ceremony, Roy presented Fredette with the orders promoting him to the rank of colonel, and his new rank was pinned on by his son, Colby Fredette, and father, Maurice Fredette. His other guests of honor were his partner, Jennifer O'Leary, and stepdaughter, Ally Gentle. Col. Fredette thanked his family and friends who were in attendance (limited due to COVID-19), and daughter, Morgan Fredette, who could not attend. He also thanked those who provided support and mentorship throughout his career. He commented on his immediate family's extensive military service and how it shaped his life.

He began his military career in the Maine Air National Guard's 101st Air Refueling Wing as a personnel officer, transitioning to the legal career field upon his graduation from law school. At the Wing, he served as the Wing's Deputy Staff Judge Advocate and Staff Judge Advocate, until taking on new responsibilities at the Joint Force Headquarters in Augusta.

In his civilian profession Fredette has practiced law in Maine since 1994 and served in the Maine House of Representatives from 2010 to 2018, where he was the House Minority Leader from 2012 to 2018.

Kenneth W. Fredette (center), a staff judge advocate in the Maine Air National Guard, has the rank of colonel pinned on by his son, Colby Fredette (right), and father, Maurice Fredette, at Fredette's promotion ceremony held May 2, 2021, at the Maine Army National Guard's 240th Regional Training Institute in Bangor.