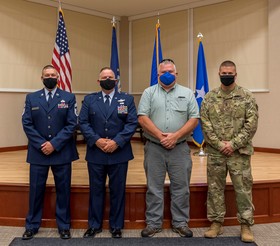 AUGUSTA, ME (08/11/2020) (readMedia)-- Maine is filled with small communities where residents pass along values like commitment and selfless service from one generation to another. Young children grow up together learning these values and go on to rely on them throughout their lives and professional careers.

One organization has benefited from this tradition, and several of its current leaders have come from the same small community. Three senior members from the Maine National Guard grew up in Penobscot County, and graduated from the Lee Academy. Command Sgt. Maj. Brian Dill, 50, Chief Master Sgt. Scott Osgood, 49, and Brig. Gen. Frank Roy, 51, grew up together and joined the military as teenagers.

Dill, now of Fayette, became the State Command Sergeant Major in June. It is the highest enlisted position within the Maine Army National Guard. Osgood, of Cherryfield, is currently the Command Chief Master Sergeant of the Maine Air National Guard's 101st Air Refueling Wing in Bangor, the highest enlisted position within 1,000-member 101st, working just down the hall from Roy. For the last four years Roy has served as the Wing's commander, but on Aug. 1, Roy, of T1R9, became the Maine Air National Guard's Chief of Staff, the same day he was promoted to brigadier general.

So how did three childhood friends from rural Maine come to serve as senior leaders within the Maine National Guard?

Dill grew up in Springfield, while Osgood lived in Carroll Plantation, and Roy in Prentiss township. The three areas are located in eastern Penobscot County, east of Lee.

Dill, whose grandfather was in WWII and father was in Vietnam, enlisted in the Maine Army National Guard in March 1988 at the age of 17. He would graduate with Osgood that June.

"Scott's dad was my teacher, coach, and role model, and I learned the importance of a good work ethic from him," said Dill. "Frank's dad was also a role model and the one who recruited me to the Army. He pushed me towards learning a skill that could be used on the civilian side as well as serve my country."

"My dad was very committed to his work, both at the school and as a member of the Maine Air National Guard in Bangor," said Osgood. "At an early age, I was well-aware of the hard work and dedication required to wear the uniform."

Osgood was accepted into the U.S. Air Force Academy in high school. When a unique turn of events was to delay his enrollment in the Academy for at least a year, Osgood decided to enlist in the Maine Air National Guard.

Roy graduated from Lee Academy in 1986 had already begun his military career by the time Dill and Osgood enlisted.

"I enlisted in the Maine Army National Guard as a medic before I graduated high school," said Roy. "There were a number of people in my youth who helped influence my decision to serve, including my father and Scott's father and I knew that it would help open a number of opportunities that I may not have otherwise had."

Roy would go on to be trained as a helicopter pilot as a commissioned officer in the Army before transferring to the Air National Guard in 1993.

"The benefits that were available through our military service were really appealing to us," said Roy. "Coming from a small community, it really helped us broaden our horizons and opened doors to new opportunities that we may not have otherwise considered."

Following college, Dill taught health and physical education while coaching boys' soccer, basketball and baseball at Southern Aroostook Community School in Dyer Brook. He was hired full-time by the Army National Guard in 1995 and has served in a variety of different roles across Maine over the past 25 years. Some of these include administrative and operations positions within the 133rd Engineer Battalion headquartered in Brunswick, serving as the command sergeant major of the 52nd Troop Command in Augusta, to now leading as the Command Sergeant Major of the Maine Army National Guard.

Osgood joined the Maine Warden Service in 1993, where his exemplary service has paralleled his military career. Among these accomplishments, Osgood received the Exemplary Service Award from the Warden Service for his actions in tracking and saving the lives of two lost young sisters on March 28, 2011, in Washington County. He has been involved in numerous search and rescue efforts across Maine and has educated thousands in conservation and the protection of fish and wildlife resources.

After college, Roy continued expanding his training as a pilot. His transition from the Army to the Air National Guard required him to attend pilot training on the KC-135 aircraft for approximately 18 months. Roy began working full-time at the 101st Air Refueling Wing in 1998. His roles there have included Flight Safety Officer, Chief of Wing Safety, and Wing Commander. He is a command pilot with over 3,900 hours of combined flying hours in rotary-winged and fixed-winged aircraft.

With almost 100 years of collective service between the three them, Dill, Osgood and Roy have played a part in just about every support operation within the State since the late 1980's.

"I've worked at different levels within the 133rd Engineer Battalion and we were involved in helping communities from York to St. Agatha," said Dill. "One of the more rewarding operations I was involved in was during the Ice Storm in 1998, we helped deliver generators and water trailers to different towns throughout southern Maine. It has been incredibly rewarding to be able to put the skills we've learned in the military to use here at home to support our neighbors and our communities."

In the Air National Guard's 101st Air Refueling Wing, Osgood and Roy have supported activities and outreach in the broader community. This has ranged from educating the region's youth on math and science through a program called STARBASE, providing orientation flights to area employers, to volunteering time with veterans at the Maine Veterans' Home.

"We've been incredibly fortunate to have opportunities to help the people in Maine in our roles in the Air National Guard," said Osgood. "Coming from a small area where everyone knew everyone else, and helped out when help was needed, really instilled a sense of giving back."

The Maine Army National Guard has a notable history of supporting operations outside of the state. The 133rd Engineer Battalion has lineage to Joshua Chamberlain's 20th Maine in the Civil War and is one of several National Guard units to have fought in the American Revolution and the War of 1812.

Dill deployed with the 133rd in 2004 in support of Operation Iraqi Freedom and stateside he has supported the mobilization process for deploying Army National Guard units. During his 16-month deployment, Dill was responsible for tracking his unit's personnel and missions throughout Northern Iraq. In all, he was involved in over 700 engineer missions during his time in Iraq.

"I've had the privilege of working with many great Soldiers and leaders," said Dill. "I have trained with them, deployed with them, followed them, and now I have the opportunity to lead them. They have proven themselves in deployments, in natural disasters, and now during a global pandemic."

"Support operations at the Wing have pretty much been non-stop since the end of 2001," said Roy. "The 101st is a key component to the air refueling bridge that keeps all other allied aircraft flying to get to places like Iraq and Afghanistan. We couldn't do this without the incredible commitment and dedication of our Airmen here in Maine."

"I have deployed several times in different positions," said Osgood. "When you are around others from Maine in situations like that, it really gives you a confidence and a level of trust. I think this has a lot to do with that sense of community that we all have that started by coming from those small towns, like Lee."

"Coming from a small town and learning the morals and values of family, friends, responsibility, commitment, honesty and integrity is why we are where we are today," said Dill. "Many people have had an impact on us as leaders."

"There is a lot to be said about the values so many young adults receive from mentors and leaders in communities across Maine," said Roy. "We were fortunate to make the most out of these opportunities, and we hope that we can have that same impact on others."

Osgood, whose daughter is on active duty in the Air Force and son is a member of the 101st, is optimistic that his experience is not unique.

"Every community has members who make a difference in influencing and encouraging its youth," said Osgood. "Hopefully Brian, Frank and I have been able to do this as well as those who have supported us."

As Dill settles in as the fifteenth Maine Army Command Sergeant Major, Roy will be moving into an office just down the hall from him as the Chief of Staff to Maine National Guard's Adjutant General, Maj. Gen. Douglas A. Farnham. They will both be working in the state headquarters at Camp Chamberlain. Coincidentally, it is about the same distance Roy's office had been from Osgood's at the Wing.

Congratulations to these three leaders from rural Maine. They epitomize the values that have been forwarded through a long-standing tradition in Maine for generations. They have served their community, state, and nation well and continue to represent what makes Maine special.