The Margaret L. Wendt Foundation to be Honored by Preservation League 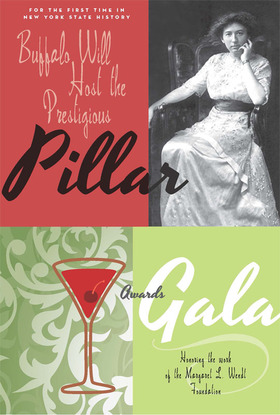 ALBANY, NY (06/20/2012)(readMedia)-- For the first time in its history, the Preservation League of New York State will present its most prestigious statewide award at an event outside New York City.

On Thursday, June 28, the historic Kleinhans Music Hall in Buffalo will be the setting for the Pillar of New York Awards Gala.

Since 1992 the Pillar of New York Award has recognized those whose unwavering commitment to New York's cultural, community and architectural heritage have made them role models throughout the Empire State and beyond. Past honorees include Peggy and David Rockefeller, Mrs. Vincent Astor, Ronald Lauder, and Tiffany & Company.

The League is bringing this celebration to Buffalo to celebrate Margaret L. Wendt's rich legacy of giving to the city that she loved and the continuation of that vision through the work of The Margaret L. Wendt Foundation and its trustees Janet Day, Robert Kresse, and Thomas Lunt.

From its headquarters in Albany, the Preservation League has always had a strong presence in Buffalo, and recent years have required an even greater commitment of its resources to the western part of the State. "With the momentum following the National Preservation Conference in October, there is no doubt League services will be in greater demand," said Tania Werbizky, the League's regional director for technical and grant programs for the Southern Tier and Western New York.

"From Buffalo's Central Terminal to the Niagara Falls Custom House, and from Graycliff to the Botanical Gardens, many of Western New York's most iconic historic resources illustrate the power of preservation," said Karen Arrison, vice president of the Clement and Karen Arrison Family Charitable Foundation, which is the presenting sponsor of the Pillar of New York Gala. "Welcoming the Pillar of New York Gala to Buffalo helps to elevate our visibility on a statewide stage. As a recently-elected member of the Preservation League's board of trustees, I am looking forward to working with the League to ensure that Western New York's landmarks, neighborhoods and rural landscapes are protected for future generations."

M&T Bank, which traces its origins to the founding of Manufacturers and Traders Bank in Buffalo in 1856, is the underwriter of the event.

Individual tickets range from $125 to $1,000 and tables are also available. Proceeds from the event benefit the Preservation League of New York State, a 501c3 corporation based in Albany. For information or to make reservations, call 518-462-5658 x11, or purchase tickets online at www.preservenys.org.