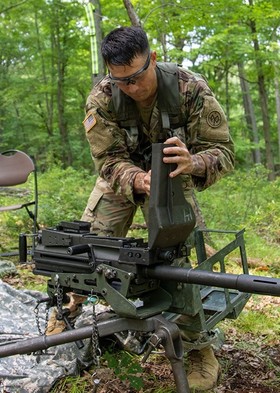 CAMP SMITH TRAINING SITE, CORTLANDT MANOR, N. Y. (04/20/2021) (readMedia)-- Seven New York National Guard Soldiers from across the state are competing for the title of "Best Warrior" during an annual competition at the Camp Smith Training Site in Cortlandt Manor this week.

The Soldiers represent the New York National Guard's major commands and compete in two categories. Soldiers in the rank of specialist or private compete against each other. Sergeants, staff sergeants and sergeants first class compete to see who is the top noncommissioned officer.

The Soldiers who make it to the state competition have already won similar events at the battalion and then brigade levels of competition.

For the last three years, New York National Guard Soldiers have won the regional Best Warrior event and competed at the national level.

The competitors will attempt to get their best score in the Army Combat Fitness test which evaluates a Soldiers ability to perform physically in combat.

Soldiers are also tested on their knowledge in the areas of military justice, current events and Army history, security and intelligence operations, military courtesy, leadership, counseling and how to deal with chemical and biological weapons. Participants are quizzed on military knowledge by a board of senior sergeants who evaluate them on their ability to handle stress and military appearance.

They are graded in their ability to handle hands-on military tasks -such as emplacing a mine, performing first aid, and throwing a grenade- as well as their marksmanship ability with the M-4 rifle. The contestants must qualify with their assigned weapon and also score well during the "Stress Shoot" event that involves firing several different weapons.

The participants also negotiate a land navigation course, both at night and during the day.

In the final event, Soldiers will compete in a 12-kilometer road march carrying a 35-pound pack and their weapons.