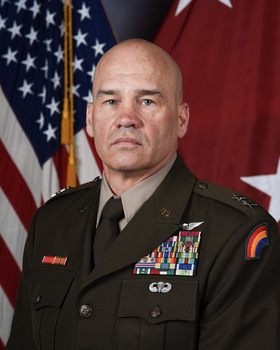 Spencer, has been serving as the deputy commander of sustainment for the 10,500-member New York Army National Guard since March of 2018.

The event is open to members of the press.

WHAT: Spencer takes command of the 42nd Infantry Division during a formal change of command ceremony. The ceremony, which involves the passing of the units flag, or colors, siginifies the transition from one commander to another. Originally the ceremony allowed the troops to see who they would follow on the battlefield.

Ferrari, the outgoing commander, passes the unit flag to Shields, the presiding officer, who then entrusts it to Spencer, the new commander.

Reporters will have the opportunity to interview both the incoming and outgoing commanders. Video and photographic opportunities include Soldiers in formation as well as the ceremony in which the unit colors are transferred.

COVID-19 precautions must be followed.

Major General Thomas Spencer previously he has served as the Assistant Deputy Commander of Sustainment, for the 42d Infantry Division, New York Army National Guard dfuring a year-long deployment to the Middle East in 2020.

Spencer has served in numerous leadership and staff positions in his 34-year career as an officer in the Army and Army National Guard.

He is a resident of York, Maine.

He is a veteran of Operation Desert Shield - Desert Storm where he served as Platoon Leader in the 2nd Battalion, 18th Field Artillery from September 1990 to March 1991

As a company commander in the 4th Battalion, 4th Aviation Regiment he served as part of Operation Restore Hope, in Mogadishu, Somalia from December 1993 to March 1994.

He served as assistant Division Aviation Officer for the 1st Armored Division, (Forward), in Bosnia from December 1995 – December 1996. He served in Iraq from January 2004 to January 2005 as the Operations Officer of the 197th Field Artillery Brigade.

Spencer holds a Bachelor of Arts from the University of Southern Maine in Political Science and a Masters in Strategic Studies from the U.S. Army War College.

In civilian life, Spencer is a Pharmaceutical Sales Manager; for Astellas Uroloigical in New England and eastern New York.

Ferrari has served in numerous leadership and staff positions in his 40-year career as an officer in the Army National Guard.

He is a veteran of Operation Spartan Shield where he served as the Commander of Task Force Spartan in Kuwait March 2020 – November 2020; and he served as the Commander, 50th Infantry Brigade Combat Team during its deployment in support of Operation Iraqi Freedom in 2008-2009 as a Security Force Brigade with duties in Camp Cropper, Camp Bucca, Balad, Ashraf, and Baghdad Iraq.

His military education includes the Army War College Class of 2007 and his college degrees include a Bachelor's of Science in Business Information Systems and a Masters of Strategic Studies.

Ferrari works for the New Jersey Department of Military and Veterans Affairs and is the Superintendent of Veterans Haven South in Winslow, NJ. Veterans Haven is a 99 Bed homeless Veterans transition facility that partners with the federal Veterans Administration to focus on homeless Veteran's health, welfare, income stability and permanent housing placement.

The 42nd Infantry Division first organized in World War I from National Guard units from around the country. The division's first chief-of-staff, then Col. Douglas MacArthur, said the division would stretch across the United States "like a rainbow" and the nickname stuck. In World War II the "Rainbow Division" landed in France and fought across Germany, taking several major cities, liberating the Dachau Concentration Camp, and occupying Vienna.

Following World War II the division became part of the New York National Guard. Division Soldiers responded to natural disasters, including the major ice storm of 1998, and responded when the World Trade Center was attacked on Sept. 11, 2001.

The division headquarters returned to the Middle East in November 2007 as the Army Forces Component Headquarters for the joint multinational Bright Star training exercise in Cairo, Egypt. Division leaders and staff worked alongside partners from the Egyptian 5th Armored Division.

In January 2020, the division headquarters mobilized for operations in Kuwait, Kingdom of Saudi Arabia, and Jordan in support of Operation Spartan Shield. The Division provided command and control for National Guard and Active Component forces. The Division redeployed in November 2020.

Today, the Soldiers who wear the famous 42nd Infantry patch continue the Division's long-standing tradition of service to the nation, state, and community.