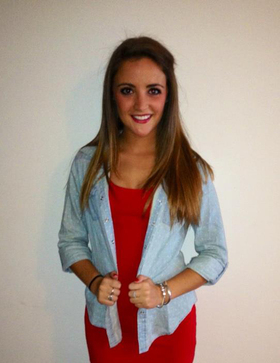 Katie Jurlando, president of the collegiate chapter of AFP at Flagler

Both Jurlando and Schulz applied for the chance to attend the conference where spots were limited. After a two-month wait, both women were notified of their acceptance.

Jurlando, president of the collegiate chapter of AFP at Flagler, was awarded an $800 scholarship for travel expenses provided by the AFP Foundation and philanthropists Stephen M. and Marjorie K. Levy.

"It will be a great place to learn more about the industry, as well as make connections with people I may someday have the opportunity of working for," said Jurlando, who became interested in the conference because of her desire to work in the nonprofit sector after graduation. "I'm honored that I was selected and I know I'll gain a lot of tips and tricks from the professionals there to bring back to our AFP chapter."

The conference is in its 50th year and hosts fundraisers across the world. This year's conference will feature guest speakers such as musician John Legend and Barbara Pierce Bush, daughter of George W. Bush.

The AFP represents 30,000 members in 230 chapters throughout the world, working to advance philanthropy through advocacy, research, education and certification programs. The association fosters development and growth of fundraising professionals and promotes high ethical standards in the fundraising profession.

Flagler College is an independent, four-year, comprehensive baccalaureate college located in St. Augustine, Fla. The college offers 24 majors, 29 minors and two pre-professional programs, the largest majors being business, education and communication. Small by intent, Flagler College has an enrollment of about 2,500 students, as well as a satellite campus at Tallahassee Community College in Tallahassee, Fla. U.S. News & World Report and The Princeton Review regularly feature Flagler as a college that offers quality education at a relatively low cost; tuition is $23,690, including room and board. A relatively young institution (founded in 1968), Flagler College is also noted for the historic beauty of its campus. The main building is Ponce de Leon Hall, built in 1887 as a luxury resort by Henry Flagler, who co-founded the Standard Oil Company with John D. Rockefeller. For more on Flagler College, visit www.flagler.edu.