Training will begin around 8 a.m. and end at 4 p.m. No weapons or simulated ammunition will be used. 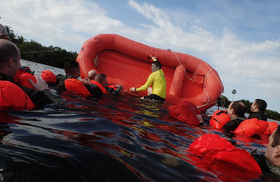 The training will involve on shore exercises in the morning and Airmen in the water conducting water survival exercises during the second half of the day.

No weapons or simulated munitions will be used during the training.

Area residents are likely to observe low-flying C-130 transport aircraft and HH-60 Pave Hawk rescue helicopters in the area during the exercise period.

The park is located off Route 9W in New Windsor.

In case of inclement weather the training will be held on Sunday, June 2.

The training being conducted is required for United State Air Force aircrew members. They undergo periodic training to simulate survival situations in the event of a downed aircraft.

This training includes Survival, Evasion, Resistance, and Escape instruction, which familiarizes personnel to survive in the wilderness and avoid detection by enemy forces.

Members of the 105th Airlift Wing, based at Stewart Air National Guard Base in Newburgh, are being trained by specialized instructors from the New York Air National Guard's 106th Rescue Wing to accomplish this life-saving and critical training.