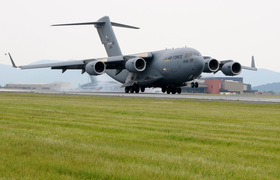 The first C-17 assigned to the 105th Airlift Wing touches down on July 18.

STEWART AIR NATIONAL GUARD BASE, NEWBURGH, NY (08/05/2011)(readMedia)-- The New York Air National Guard's 105th Airlift Wing will make its transition to the C-17 Globemaster III cargo plane from the C-5A Galaxy on Saturday, August 6 with a morning roll-out ceremony. Members of the media are invited to attend.

WHAT: A ceremony marking the start of the wing's transition from operating the C-5A Galaxy to flying the more modern C-17 Globemaster III. The C-17 is the newest, most flexible cargo aircraft to enter the airlift force. It is capable of rapid strategic delivery of troops and all types of cargo to main operating bases or directly to forward bases in the deployment area. The C-17's performance improves the ability of the total airlift system to fulfill the worldwide air mobility requirements of the United States. Stewart Air National Guard Base will receive training and test equipment this summer and will continue training maintainers and aircrew until all eight C-17s are in place by May 2012.

WHEN: Members of the media should be at the front gate no later than 9:45 a.m. in order to go through security and be in position by 10:30 a.m.

Video and still imagery of the C-17 ceremony and interviews with leaders of the 105th Airlift Wing. Reporters will be able to tour the C-17.

The design of the aircraft allows it to operate through small, austere airfields. The C-17 can take off and land on runways as short as 3,000 feet (914 meters) and only 90 feet wide (27.4 meters). Even on such narrow runways, the C-17 can turn around using a three-point star turn and its backing capability.

The C-17 made its maiden flight on Sept. 15, 1991, and the first production model was delivered to Charleston Air Force Base, S.C., June 14, 1993. The first squadron of C-17s, the 17th Airlift Squadron, was declared operationally ready Jan. 17, 1995. The Air Force originally programmed to buy a total of 120 C-17s, with the last one being delivered in November 2004. Current budget plans involve purchasing 180 aircraft. The original 120 C-17s were based at Charleston AFB; McChord AFB, Wash., (first aircraft arrived in July 1999); Altus AFB, Okla.; and at an Air National Guard unit in Jackson, Miss. In September 2004, McGuire AFB, N.J. began basing the first of 13 aircraft expected by June 2005.

· The Electrical Power System generates enough electrical power to serve the needs of over 200 single-family homes.

· The air conditioning/heating capacity of the C-17 would keep over forty 3-bedroom homes comfortable in the coldest winter or the hottest summer.

· The gas tank in the C-17 can hold approximately 36,000 gals of fuel; this much gas would allow a car (getting 25 mpg) to make about 35 trips around the world at the equator.

-102 -- Number of paratroopers that can fit inside the jet

The C-5 is one of the largest aircraft in the world and the largest airlifter in the Air Force inventory. The C-5 can carry more than any other airlifter. It has the ability to carry 36 standard pallets and up to 81 troops simultaneously. The Galaxy also carries all of the Army's air-transportable combat equipment, including such bulky items as its 74-ton mobile scissors bridge from the United States to any theater of combat on the globe. It can also carry outsize and oversize cargo intercontinental ranges and can take off or land in relatively short distances. Ground crews are able to load and off-load the C-5 simultaneously at the front and rear cargo openings, reducing cargo transfer times. Other features of the C-5 are:

-The distance of the Wright Brothers' first flight-120 feet-was one foot less than the length of the C-5's cargo deck.

- More than 103 miles of wiring is required to operate all of the C-5's aircraft systems. The C-5 also contains 4 miles of tubing and 5 miles of cable.

- The C-5 carries enough fuel for the average American car to make 130 roundtrips between New York and Los Angeles or about 31 trips around the world.

-The C-5's environmental control system has a total cooling capacity of 24 tons, enough to air condition 8, average-sized homes at the same time.

- During takeoff, each of the C-5's four GE TF-39 turbofan engines, rated at 43,000 pounds of thrust, has an intake of approximately 1,500 pounds of air per second. A at this rate, a structure the size of the Houston Astrodome would be emptied in less than 5 minutes.

-The total engine power of a C-5 equals that of 800 average automobiles.

- Each C-5 wing weighs more than 40,000 pounds, which is equivalent to the weight of an empty C-130 "Hercules" without engines.

A total of 1,346 Airmen, full-time and traditional part-time Air National Guardsmen, are assigned to the 105th Airlift Wing. Along with the basing action, 12 C-5 "Galaxys" assigned to Stewart ANGB will be retired. Stewart's C-17 unit is scheduled to reach initial operating capability by December 2013.

The 105th Airlift Wing is currently one of three Air National Guard units in the country with an operational C-5 mission. The unit's 13 aircraft regularly fly missions around the world in support of America's armed forces. Stewart Air National Guard Base is located just 70 miles North of New York City and has a 60-year proven track record for answering the call to duty both in New York State and around the globe. The 105th AW recently celebrated its 25th anniversary at Stewart ANGB.