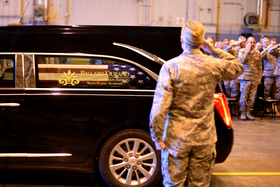 Members of the 105th Airlift Wing, based at Stewart Air National Guard Base, Newburgh, NY, participate in the dignified transfer ceremony of TSgt. Joseph G. Lemm on December 28, 2015.

Ramp ceremonies are held by military units to honor service members when their remains depart or arrive at a location.

Bonacasa, a Coram resident who was killed in action in Afghanistan on Dec. 21, was a former member of the 106th Rescue Wing at Gabreski from 2008-10.

WHAT: A ramp ceremony in which the body of Staff Sgt. Louis Bonacasa will return to F.S. Gabreski Air National Guard Base from Dover Air Force Base aboard a 105th Airlift Wing C-17. Airmen will be present in a mass formation to honor Staff Sgt. Bonacasa. Col. Timothy LaBarge, the commander of the 105th Airlift Wing will speak.

Reporters must contact Tech Sgt. Sara Pastorello or Tech. Sgt. Dorie Weber at 845-563-2075 no later than noon on Wednesday, December 30 for access to this secure military facility.

Video of the ceremony and the honorable transfer of remains.

Reporters wishing to attend the event must call Tech Sgt. Sara Pastorello prior to noon on Wednesday, December 30 and must provide e-mail address (to allow for updated time and place information if necessary) along with names of representatives. Press representatives must sign Department of Defense dignified transfer ground rules when they arrive at the base. For more information contact the 105th Public Affairs office at 845-563-2075.

New York Air National Guard Staff Sgt. Louis Bonacasa, a member of the 105th Base Defense Squadron died on Dec. 21 when a suicide bomber attacked his patrol in a village outside Bagram Air Base in Parwan Province.

Tech. Sgt. Joseph Lemm, another member of the 105th Base Security Squadron and four other Air Force members also died in the attack.

Bonacasa, age 31, was a resident of Coram, N.Y. He enlisted in the active Air Force in 2002 and transitioned to the New York Air National Guard's 106th Security Forces Squadron, at F.S. Gabreski Air National Guard Base in Westhampton Beach, N.Y. in 2008. He joined the 105th Base Defense Squadron in 2010.

He deployed to Afghanistan from January to June 2013, and to Iraq from June to December 2011.

Following the transfer of remains, the family will hold a wake at the Branch Funeral Home of Miller Place at 551 Route 25A, Miller Place, NY 11764 with viewing times held on Wednesday, Thursday and Friday.

A funeral Service to be held Saturday with burial at the Calverton National Cemetery.

For more details about funeral services, contact the Branch Funeral Home of Miller Place at (631) 736-7000.

Lemm, age 45, was a resident of West Harrison, N.Y. and enlisted in the 105th Airlift Wing in 2008, serving his entire time with the 105th Base Defense Squadron as a security force member. He had previously served in the military from 1988 to 1996.

His prior deployment experience included missions to Afghanistan from January to June 2013 and to Iraq from June to December 2011.

Lemm returned to the 105th Airlift Wing in Newburgh on Monday, December 28. Funeral Services for Tech Sgt. Lemm will be held at Saint Patrick's Cathedral Wednesday, Dec. 30 in New York City, followed by burial at Gates of Heaven Cemetery in Hawthorne, at 10 West Stevens Ave.