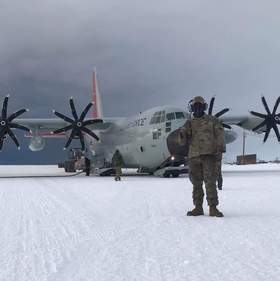 An LC-130 from the 109th Airlift Wing at Williams Field Antarctica earlier this month. (Photo by Master Sgt. Mike Hill)

A total of 50 Airmen and three aircraft deployed in support of the mission which began in November, 2020. They will be returning over the next few days.

Members of the press are invited to cover the return on Wednesday.

WHO: A LC-130 and crew assigned to the Air National Guard's 109th Airlift Wing will be returning home following the Wing's 33rd season supporting National Science Foundation research in Antarctica as part of Operation Deep Freeze.

WHAT: Return of Airmen and Aircraft to Stratton Air National Guard Base in Scotia from a four month deployment to New Zealand and Antarctica.

WHEN: Wednesday, February 24, 2021, estimated arrival time is 815 pm. Media members must call SMSgt William Gizara to be placed on a call back list to verify the exact arrival time.

Members of the media MUST contact SMSgt Willie Gizara by calling 518-344-2423 as soon as possible in order to gain access to the secure facility.

Subject matter experts will be available to discuss this year's Operation Deep Freeze season. There will also be an opportunity to obtain imagery of the aircraft landing and speak briefly to Airmen.

This year's Operation Deep Freeze season ran from November to February and was significantly shorter and had a reduced footprint due to COVID-19.

Three LC-130 ski-equipped aircraft and about 31 Airmen deployed to Christchurch, New Zealand to be on standby for contingency missions.

The unique capabilities of the ski-equipped LC-130 aircraft make it the only one of its kind in the U.S. military, able to land on snow and ice.

The primary mission of the 109th Airlift Wing is to provide airlift within Antarctica, flying to various remote locations from McMurdo Station. Crews transported scientists, support, fuel, supplies, medical supplies and more throughout the season.

The 109th Airlift Wing has been supporting the National Science Foundation's South Pole research since 1988.