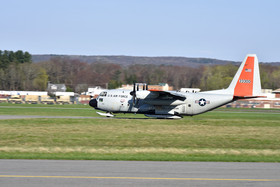 This is the first of six rotations of aircraft and personnel from the Scotia air base to Greenland. About 200 Airmen will participate in the missions which go from April to August.

The Airmen and aircraft of the New York Air National Guard's 109th AW provide support for the National Science Foundation by transporting fuel, cargo and passengers to and from the various camps throughout Greenland.

The wing flies the LC-130 which is a ski-equipped version of the Hercules tactical transport aircraft. The LC-130s are the largest aircraft in the world which have the ability to land on ice or snow.

Kangerlussuaq is used as a base because it is home to Greenland's largest airport.

During the 2018 season the 109th completed 92 missions, transporting 780 passengers and delivering 1.6 million pounds of cargo and nearly 68,000 gallons of fuel to various camps throughout Greenland. The wing also flew 146 training flights during last season.

We are leading the way in the Arctic with exercises and airlift missions, " said Col. Michelle Kilgore, 109th Airlift Wing commander.

Military leaders say they expect missions in the Arctic to increase and the 109th expects to be part of that, Kilgore explained.

"Our Airmen are consistently challenged with a high ops tempo with year round missions taking us to the north and south poles. I am so proud of the work they do both at home and around the globe. As this Greenland season kicks off I am confident they will exceed all expectations," Kilgore said.

From October to March, the 109th supports Operation Deep Freeze (ODF) in Antarctica, and in the summer months, the unit flies to Greenland to not only continue their support for the National Science Foundation but to also train for ODF.

Training not only includes flight operations but also arctic survival training known as the "Barren Land Arctic Survival Training," held at Raven Camp at the end of May.

"There is a real possibility of having one of our ski-equipped aircraft and its crew become stranded in a barren land situation. If stranded, this training will equip our personnel with the knowledge and survival techniques necessary to survive in those hostile environments," Schiller said.

The wing's presence in Kangerlussuaq also leads itself to a growing relationship between the Airmen and the local community.

"This year the 109th Airmen are also collecting children's shoes, books, bikes, jackets and other to donate to the villagers of Kangerlussuaq, who host the mission each year," said 1st Lt. Mathew Begin, 109th Aircraft Maintenance Squadron officer in charge. "This effort is just another small way to help out our extended family in Greenland. Anytime there's a chance to give back and make a difference in someone else's life, take it, no matter how large or small. ... I'm proud to be surrounded by a unit dedicated to investing in people and the community, equally to accomplishing the mission."