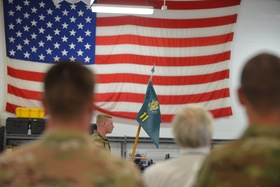 Sgt. Rivard, guidon bearer for the 11th CST, stands in front of the formation during the ceremony.

"I cannot think of a better officer to lead the CST through whatever challenges may lie ahead," said Bosse in his remarks. "Not only is Maj. Hepburn a tactically proficient leader, he is of the highest character and cares deeply for those he leads. The unit is in great hands."

Hepburn thanked Bosse for his years of friendship and collaboration, as well as for maintaining a high level of readiness and espirit de corps within the unit.

"I am excited to be part of this team once again," said Hepburn, who previously served as the deputy commander of the 11th. "Few units within the Armed Forces have the word 'team' in their title, and it is meaningful that it is part of the title of this unit. We are not a troop, battery, detachment or squadron – we are a team. That mentality and ethos drives what we do."

The 11th CST is comprised of 22 active duty soldiers and airmen who support local, state, and federal emergency management and response agencies across the state of Maine and Northeast region. The unit specializes in supporting domestic authorities during incidents involving the potential for chemical, biological, radiological, nuclear or explosive threats (CBRNE).

The 11th has the capability to respond to both man-made and natural disasters, and supports major public gatherings to include presidential inaugurations, major sporting events, and other significant events with large public audiences. Recently, personnel from the 11th joined elements from 19 other CSTs to provide support to the 2022 Boston Marathon, conducting pre-race hazardous material sweeps and maintaining a presence for any additional taskings.

The 11th is one of 57 National Guard civil support teams nationwide that provide critical CBRNE response and support to state and federal interagency partners.

Hepburn began his military career in the United States Navy and spent six years on active duty as a submarine nuclear technician before transitioning to the New Hampshire Army National Guard as an infantryman. He earned his commission as a chemical officer through the University of New Hampshire ROTC program and previously served as a team leader with the 15th CST in Vermont, as well as deploying to Afghanistan with the 86th Infantry Brigade Combat Team prior to transferring to the Maine Army National Guard in 2013.

Bosse enlisted in the active Army in 1993 and served six years with the 25th Infantry Division in Hawaii and the 82nd Airborne Division in North Carolina. Returning to Maine in 1999, he served in Brewer's Bravo Company, 3rd Battalion, 172nd Infantry Regiment (Mountain) and the 11th CST. Bosse was commissioned through the University of Maine ROTC program and returned to Bravo Company as both a platoon leader and company commander, deploying with the unit to both Iraq and Afghanistan. He has also held numerous staff positions in the Maine Army National Guard to include deputy director of military support and director of the state partnership program with the Armed Forces of Montenegro. Bosse will retire from the military next month with plans to continue working, self-employed.