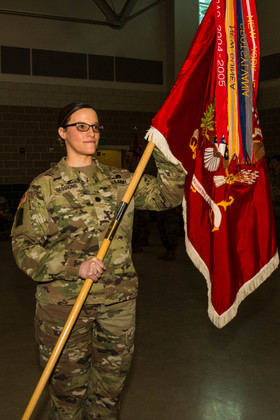 "133rd Engineer Battalion soldiers have served with distinction in supporting U.S. Customs and Border Patrol on the Southwest border, provided Maine CDC with COVID-19 assistance throughout Maine healthcare facilities, supported the 59th Presidential Inauguration for President Biden, conducted engineer projects at Wood Island Life Saving Station, and prepared for future projects in East Millinocket and Skowhegan," said Cotta, who has been the commander since October of 2020.

During the ceremony, Cotta was presented with the Meritorious Service Medal, as well as the Bronze Order of the de Fleury Medal, an award presented by the Army Engineer Association for members who have had a significant impact on the U.S. Army Engineer Regiment. His next assignment will be in the operations section at Joint Force Headquarters.

Sessions returns to the battalion having just completed a tour as the Joint Force Headquarters detachment commander in Augusta. In addition to several previous staff positions, she previously commanded the 136th Engineer Company, based in Skowhegan and Lewiston, as well as the headquarters company of the 133rd in Brunswick.

"As a young lieutenant, it was my dream to one day command this battalion," said Sessions, who is the first female officer to command the 133rd. "I didn't get here alone. I had mentors and I had peers...It's really an honor and a humbling experience to lead the finest men and women the Maine Army National Guard has to offer."

"We will be masters of our craft," Sessions writes in her command philosophy. "We will train to support any federal mission that comes our way, understanding that we also serve our great state of Maine."

"We will develop accountable leaders who claim both successes and failures," Sessions continued. "A leader understands that we all had a part in it. We take ownership in the problems as well as the solutions...We will build a culture of pride and excellence, and encourage a sense of belonging to something bigger than yourself."

Cotta was raised in South China, Maine, the son of David and Helga Cotta, and graduated from Erskine Academy. He and his wife Jill, a teacher in Edgecomb, have three children – Owen, Ellie, and Keagan – and currently live in Alna. They enjoy supporting youth sports in Wiscasset and Boothbay. In his full time capacity, Cotta works at Camp Keyes in Augusta, managing the training sites for the Maine Army National Guard. He is a graduate of the University of Maine at Farmington, the University of Maine Graduate School, and Nashotah House Theological Seminary.

Sessions is the daughter of Brian Sessions of Norway, Maine, and Marina Sessions of Clarksburg, West Virginia. She currently resides in Arlington, Virginia, with her significant other, Ryan, and is employed as a human resources specialist for the National Guard Bureau in Arlington. Sessions received both her undergraduate and masters degrees from Southern New Hampshire University.

11: Lt. Col. Shanon Cotta delivers his remarks during the change of command ceremony.

13: Lt. Col. Lisa Sessions delivers her remarks during the change of command ceremony.

15: Lt. Col. Shanon Cotta and his family following the ceremony.

16: Lt. Col. Lisa Sessions and her friends and family following the ceremony.