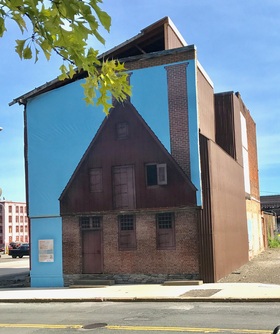 ALBANY, NY (09/25/2017) (readMedia)-- MEDIA INVITED TO ATTEND AND COVER: League President Jay DiLorenzo will announce the loan on Tuesday, September 26 at 5:30 p.m. at "48 Hudson Underground" - a talk on archeology at the site presented by Historic Albany at the Fort Orange General Store, 412 Broadway in Albany.

The Preservation League of New York State recently approved a $200,000 loan from its Endangered Properties Intervention Program (EPIP) to Historic Albany Foundation, a not-for-profit organization with plans to restore the Van Ostrande-Radliff House at 48 Hudson Avenue in downtown Albany.

The League's EPIP program was established to foster the revitalization and protection of historic resources and neighborhoods throughout New York. The loan will help support stabilization and weatherproofing at the National Register-listed building.

48 Hudson Avenue was built by Johannes van Ostrande in 1728 just outside the city's stockade walls and a few hundred yards from the old Fort Orange. The building retains many features not often preserved in other buildings from its time, including a molded anchor beam, the outline of a jambless fireplace, wide pine exterior siding, wide floorboards, steeply pitched roof beams, and original brick walls. It was listed on the National Register of Historic Places in 2008 and prior to that had been a contributing property to the Downtown Albany Historic District.

"The Van Ostrande-Radliff House provides a rare and authentic connection to Albany's early history, as well as the settlement and urbanization of New York State," said Jay DiLorenzo, President of the Preservation League of New York State. "This unassuming building, now adrift in a sea of parking lots, is the earlier of only two buildings that remain in the city of Albany from its culturally Dutch period, and became vacant in the 1990s. Since Historic Albany Foundation took ownership in 2013, they have made great strides to secure this rare resource, and the League is delighted to provide support for the next phase of the restoration."

Historic Albany Foundation has already demonstrated success in fundraising for 48 Hudson, raising some $$60,000 for the first round of emergency stabilization, and recently launched a partnership with Dutch Culture USA to highlight the significance of the building. Dutch Culture USA is the division of the Kingdom of the Netherlands' government that promotes arts and culture from the Netherlands in the United States, which provided a grant to install graphic fabric "scrims" on 48 Hudson's north and east facades. Working together, preservation architects, historians, and artists designed the north scrim to depict the building's north side in trompe l'oeil, as it likely appeared when it was constructed. The east scrim will be a large sign that will call attention to 48 Hudson from the eastern view in historic downtown Albany.

"We are so grateful that the League has a program like EPIP, which we have recommended for many other preservation projects, and now have the opportunity to use ourselves," said Susan Holland, Executive Director of Historic Albany Foundation. "The program is so helpful in our mission to restore 48 Hudson and this will help us to move forward at a good pace."

"The Endangered Properties Intervention Program allows the Preservation League to take action when historic buildings are threatened with disinvestment, neglect, and demolition," said DiLorenzo. "The Preservation League is proud to partner with Historic Albany Foundation to protect and restore this unique historic structure. As of June 2017, we've made EPIP loans totaling more than $2 million dollars that have leveraged more than $4.4 million in other public and private investments. We've seen what a difference the efforts of committed, conscientious building owners can make in a community, and we're certain that the preservation of 48 Hudson will be an inspiration to others across the state."

For more information on the Preservation League of New York State, please call 518-462-5658 or visit the League's website at www.preservenys.org .