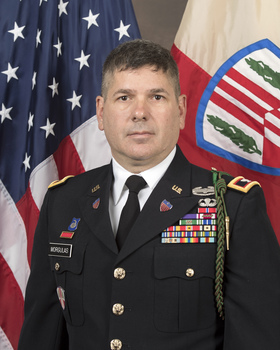 Col. Seth Morgulas, a Scarsdale resident and Iraq War veteran who is currently the deputy brigade commander, will replace Stephen M. Bousquet as the brigade commander. Bousquet will moved into a new job as deputy commander of the 53rd Troop Command.

WHO: Colonel Seth Morgulas, the incoming commander; Col. Stephen Bousquet, the outgoing commander; Brig. Gen. Michel Natali, the commander of the 53rd Troop Command and the presiding officer, and the men and women of the 369th Sustainment Brigade.

WHAT: A traditional change of command ceremony in which the colors, or flag, of the brigade will be transferred from Bousquet to Morgulas, symbolizing the transfer of authority from one commander to another. Traditionally the colors of the unit were placed with the commander on the battlefield and the transfer ceremony allowed the troops to see who they would follow in combat.

Reporters will be able to obtain video and still imagery of the ceremony and speak to New York Army National Guard leaders.

For access to this secure military facility, members of the press must contact Sgt. Jonathan Pietrantoni at 516-655-1336.

The 369th Sustainment Brigade traces its lineage back to the 369th Infantry Regiment which fought as an African-American unit in a segregated Army in World War I. The New York National Guard Soldiers of the 369th served more days in combat –191-- than any other American unit during World War I.

The 369th sustained 1,500 men killed, wounded and missing in action, more than any other American regiment. The unit received a Croix de Guerre from the French Army, whose command it fought under, and 170 Soldiers received individual awards of the high French honor.

In 2015 Sgt. Henry Johnson, who distinguished himself early in the unit's service, was awarded a posthumous Medal of Honor.

In World War II the unit-still composed of African American Soldiers with some white officers, served in the Pacific as an anti-aircraft defense unit.

As a sustainment brigade the 369th can command up to five support battalions and sustain a division in the field. The unit's Soldiers have deployed frequently to Africa in support of training exercises with U.S. allies on that continent. The 369th Soldiers have also played a key role in the National Guard response to Superstorm Sandy and other emergencies.

Colonel Seth L. Morgulas was commissioned as an armor officer in 1993 after graduating from John Hopkins University as a Distinguished Military Graduate. He first served on active-duty where he served as a tank platoon leader, both while deployed to Korea and in the United States; as a company executive officer and as a force modernization officer.

After joining the New York Army National Guard, Morgulas served as a full-time

He deployed to Iraq from 2004-2005 as the commander of Bravo Battery of the 1st Battalion, 258th Field Artillery Regiment.

He has also served as battalion executive officer, brigade and division staff officers, and as the Commander of the 369th Special Troops Battalion, which he led in Kuwait in 2016-2017.

Morgulas holds a Major in History from John Hopkins University and a law degree from the University Of Chicago Law School and a Master of Strategic Studies from the Army War College.

He is a graduate of the Armor Officer Basic and Advanced Courses, the Combined Arms and Services Staff School and the United States Army Command and General Staff College. Colonel Morgulas has also completed the Military Police Officer Transition Course and the Human Resource Qualification Course.

Colonel Morgulas and his wife Margreta live in Scarsdale and have two sons, Max and Samuel.

Col. Stephen M. Bousquet enlisted into the US Army Reserve as a Combat Medic in 1992 assigned to the 338th General Hospital, attending both Basic Training and Advanced Individual Training and subsequently enrolled in the ROTC program

. On 17 May, 1996 he received a commission as a Medical Service Corps Officer serving on Active Duty until he joined the New York Army National Guard in October, 2000. Past Active duty assignments include Chief, Environmental Health Section at Ft Drum, New York and Project Officer Industrial Hygiene Div. at Fort Meade Maryland.

Bousquet has twice deployed to Afghanistan, deployed in support of Noble Eagle and deployed to New York City after the 9/11 terrorist attacks

Bousquet is a 1996 Graduate of Canisius College with a bachelor of science in Biology and a 2011 graduate of the University of Maryland and has a Masters in Environmental Management. Bousquet currently works for the U.S. Army Corp of Engineers as a Health Physicist.

Bousquet and his wife Tracy, live in Lakeview, N.Y. and have 4 sons and one daughter; Matthew, Nathan, Alexander, Olivia and Chase.