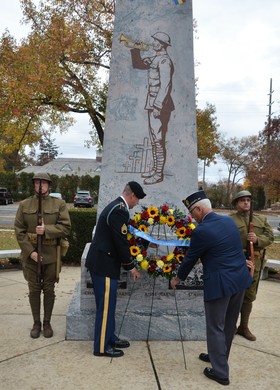 The division was formed in 1917 at Camp Mills which was located where Garden City is today.

The division was made up of National Guard units from 26 states and the District of Columbia and Col. Douglas McArthur, the division's first chief of staff, said it would stretch across the country "Like a Rainbow".

The division headquarters traditionally presents a wreath each Veterans Day weekend to mark the division's creation. The wreath is provided by the Rainbow Division Veterans Foundation which maintains memorials to the division in the United States and Europe.

WHO: Veterans of the 42nd Infantry Division and members of the New York Army National Guard's 1st Battalion, 69th Infantry.

WHAT: Placing of a memorial wreath at the 42nd Infantry Division memorial in Garden City, N.Y. Plaques will be presented to Garden City Village Administrator Ralph V Suozzi, and Garden City Village Superintendent of Public Works Joseph DiFrancisco in appreciation for the work that was done to restore the monument site.

WHERE: Intersection of Saint James Street South and Clinton Road in Garden City.

Visual of uniformed Soldier placing a memorial wreath at the site of the World War I mobilization training grounds at Camp Mills. Interviews with Soldiers and veterans about the significance of memorials during Veterans Day.

Located on a quarter-acre triangular plot of land, this monument is a fifteen by five foot obelisk of Alabama limestone. It stands across the street from what was the entrance to the 42nd Division's World War I training grounds at Camp Mills on the Hempstead Plains of Long Island. Inscribed on it are a lone bugler standing in a military cemetery, a list of the units that made up the Rainbow Division, the states they came from, and the names of the World War I campaigns in which they fought.

The monument was originally dedicated in 1941, rededicated in a 1997 and again in a 2005 ceremony, and recently restored for a commemoration of the 42nd Infantry Division's creation in 1917 in August 2017.

The Rainbow Division Veterans Foundation is a 501(c)(3) non-profit organization dedicated to commemorating the deeds, sacrifices and traditions of the 42nd Infantry (Rainbow) Division through memorials, education and the preservation of the history of the division.

One is in Garden City, the site of the Camp Mills preparations for World War I, while the other is located at Camp Gruber, Oklahoma, marking the site of the 42nd Infantry Division's mobilization for WWII.

Additional memorials are located at Fort Drum, N.Y. and Fort Dix, N.J., the two training sites for the 42nd Infantry Division's mobilization and training for service in Operation Iraqi Freedom.

These memorials recognize the sacrifices of Rainbow Division Soldiers and their families from generation to generation.

The division's first chief-of-staff, then Col. Douglas MacArthur, said the division would stretch across the United States "like a rainbow" and the nickname stuck. In World War II the "Rainbow Division" landed in France and fought across Germany, taking several major cities, liberating the Dachau Concentration Camp, and occupying Vienna.

Division Soldiers responded to natural disasters, including the major ice storm of 1998, and responded when the World Trade Center was attacked on Sept. 11, 2001. The 42nd Infantry Division became the first National Guard division headquarters to go to war since 1952 when Major General Joseph Taluto took charge of 23,000 Soldiers in North Central Iraq in 2005.

The division headquarters mobilized and deploy a contingent of approximately 60 Soldiers in 2015 to support security operations at JTF-Gitmo at Guantanamo Bay, Cuba.

The division headquarters is currently preparing to mobilize 450 Soldiers for deployment to Kuwait and other Middle Eastern operating locations in 2020.