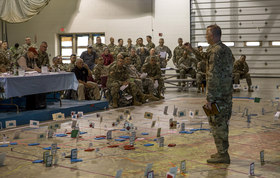 Soldiers from headquarters units located in Troy, Syracuse, Latham, and New York City will participate in a computer simulation that tests their ability to plan and execute division, brigade and battalion level missions.

The computer simulation forces the Soldiers to plan missions and conduct staff functions just as they would in an actual battle.

Dubbed "Liberty Hunter" the exercise will involve staff officers and soldiers at the division, brigade and battalion level. Divisions consist of around 20,000 troops while brigades range from 3,500 to 5,000 Soldiers. A battalion is 300 to 600 Soldiers.

The participants include the 42nd Infantry Division headquarters located in Troy, the 27th Infantry Brigade Combat Team, headquartered in Syracuse, and the 42nd Combat Aviation Brigade which is based in Latham.

During the command post exercise, leaders and staff sections participate around the clock in making decisions involving logistics, intelligence, and operations which play out in a computer simulation. Staffs must pass message traffic and reports, prepare battle plans, and write the orders to execute those plans.

This event will be primarily conducted at the Operational Readiness Training Complex.

The 42nd Infantry Division is based at Troy's Glenmore Road Armory and is the higher headquarters of the New York National Guard's 27th Infantry Brigade Combat Team and 42nd Combat Aviation Brigade.

The 42nd Infantry Division was created in August of 1917. In addition to World War I and World War II, the division served in Iraq in 2005, exercising command over 23,000 troops for Operation Iraqi Freedom.