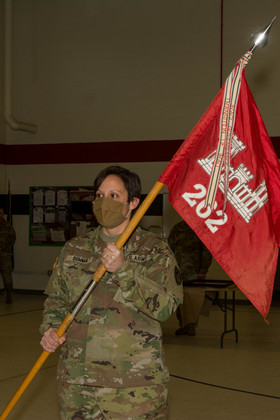 Somma returns to the 262nd from 133rd Engineer Battalion where she was a construction officer at the battalion's headquarters company in Brunswick.

Peckham has held the position for the past three years and is continuing in his full time role as the brigade training officer at the 52nd Troop Command.

The 262nd recently returned from deployment to the southwest border of the United States. While on active duty, the unit provided mobile surveillance support to U.S. Customs and Border Protection, resulting in the seizure of nearly 700 lbs of illegal narcotics.

"The privilege I had during this command was once in a lifetime," said Peckham. "The sacrifices you all make speaks volumes...I'm excited for what the future brings and I'm excited to watch the 262 progress from afar."

Somma enlisted in the Maine Army National Guard 12 years ago as a heavy equipment operator before commissioning and serving as a platoon leader and executive officer with the 262nd.

"This company is like a home to me," said Somma. "It's where I started my military career as an enlisted soldier and grew as a young officer."

Somma is the first female officer to command the 262nd. She works as a licensed professional engineer diver in Portsmouth, New Hampshire. She, her wife Sarah, and daughter Logan live in York, Maine.

"I'm incredibly honored and privileged to take command," she added.

Peckham and his fiancée, Brittany, currently reside in Augusta.

The 262nd Engineer Company is based out of Sanford and Westbrook. The unit traces its lineage back to March of 1927 and previously deployed to Iraq in 2004-2005, for which it received the Meritorious Unit Commendation.

2: Capt. Kody Peckham (left) passes the company guidon to Lt. Col. Shanon Cotta, commander of the 133rd Engineer Battalion, who will then present the guidon to the incoming commander.

3: Capt. Danielle Somma, incoming commander for the 262nd, holds the company guidon during the change of command ceremony.

8: Capt. Kody Peckham with his family following the ceremony

13: Capt. Danielle Somma with her family following the ceremony