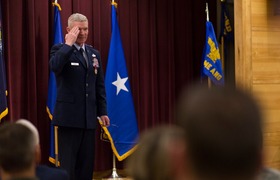 AUGUSTA, MAINE (05/16/2019) (readMedia)-- Brig. Gen. Scott A. Young, outgoing commander of the Maine Air National Guard, retired May 2 in a ceremony held at the 101st Air Refueling Wing in Bangor. For Young, it was the culmination of more than 37 years of service to the United States Air Force and the Maine Air National Guard. "I'm honored to have been a part of the greatest organization in the world, the MAINEiacs," Young said, moments before rendering his final salute. "Thank you from the bottom of my heart." During the ceremony Young was awarded the Legion of Merit for his leadership, including his efforts as a dual status commander, working to improve Army and Air Force coordination as well as the Maine National Guard's ability to respond to both state and federal emergencies. Commissioned through Officer Training School at Lackland Air Force Base in December 1981, Young was assigned to the engineering squadron at Loring Air Force Base. In September 1985, then-1st Lt. Young transferred to the Maine Air National Guard, joining the 101st Civil Engineering Squadron in Bangor. Over the next 30 years, Young served at various positions at the 101st Air Refueling Wing, culminating with his service as the vice wing commander before transferring to Joint Force Headquarters in Augusta in May 2015. "Brig. Gen. Young's leadership, at all levels of the Maine Air National Guard, will be remembered for his professionalism and selfless service. A true MAINEiac," said Maj. Gen. Douglas Farnham, Maine's adjutant general. Although Young's military service is completed, he will continue to serve the State of Maine in his civilian capacity as the deputy commissioner for the Maine Department of Defense, Veterans and Emergency Management.
Posted Thursday May 16, 2019 at 09:35 am by Maine National Guard