Talk at the New York State MIlitary Museum will begin at 2 p.m. and is free to the public 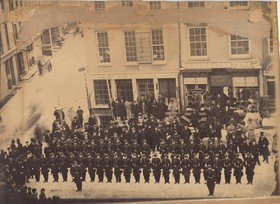 Soldiers of the 10th Regiment, National Guard New York, who fought in the Civil War as the 177th New York Volunteer Infantry, pose at the on the corner of State and Green Streets in 1864.

SARATOGA SPRINGS , NY (02/01/2020) (readMedia)-- The Civil War Battle of Port Hudson, Louisiana seen through the eyes of a 21-year old soldier from Albany County is the subject of a free talk at the New York State Military Museum at 2 p.m. on Saturday, February 8.

Retired New York Army National Guard officer and military historian Patrick Chaisson will use the diary of William Henry Harrison Freligh, a member of New York's 177th Volunteer Infantry, to discuss what day-to-day life during the six week long siege of the city by the Union Army.

In 1863 Port Hudson was the last Confederate outpost on the Mississippi. The Union Army, which included the 177th New York, mounted a 48-day siege to force the surrender of the fortress there from May 22 to July 9, 1863. When Port Hudson surrendered the Union controlled all of the Mississippi.

The 177th New York Volunteer Infantry started out as the 10th Regiment of the New York National Guard, which was headquartered in Albany. In September of 1862 the 10th regiment was ordered to active duty for 10 months. Additional soldiers were recruited in Albany, Coeymans, Lansingburg, New Scotland, Easton, Rensselaerville, Watervliet, Westerlo and Schenectady.

One of these soldiers was William Freligh, who enlisted despite his father's objections.

The newly named 177th was shipped to New Orleans and took part in the siege of Port Hudson. 23 Soldiers were killed and wounded during the siege and a failed assault on May 27. One of these was Freligh who was left for dead on the battlefield but recovered and came home to finish his diary.

By the time the 177th returned to Albany in September 1863 the regiment had lost 2 officers and 6 men, killed and mortally wounded; and 3 officers and 149 men dead of disease and other causes.

Chaisson will help bring this diary to life in a multimedia presentation that combines rare period illustrations with modern computer technology.

The New York State Military Museum is located at 61 Lake Avenue in Saratoga Springs. The Feb. 8 talk is one of several free presentations at the military museum to be offered on Saturday afternoons in February and March.