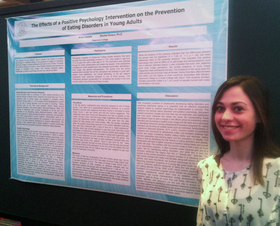 CAZENOVIA, NY (04/02/2013)(readMedia)-- Anna Cariello, of Middletown, N.Y., was among seven Cazenovia College psychology majors to have a poster presentation accepted at the recent Eastern Psychological Associations' 84th Annual Meeting in New York City, on the first weekend in March.

Cariello's research topic, "The Effects of a Positive Psychology Intervention on the Prevention of Eating Disorders in Young Adults," stemmed from her concern that eating disorders are occurring more frequently and at earlier ages than ever before, but that support, education and prevention efforts have not kept pace with the increase. Multiple factors serve as triggers for the disorder - biological, neurological and sociocultural, including the role the media plays in body image satisfaction.

She says, "Some schools have begun to implement intervention programs for eating disorders, but the results often prove ineffective. My passion for positive psychology sparked the idea to base a prevention method on using each student's individual strengths to build resiliency and help them identify and accept their authentic selves."

Cariello's program is focused on teaching positive psychology to female and male students from middle school through high school, rather than dealing only with eating disorders. She says, "The main idea is to teach students how to appreciate themselves for who they are."

Dr. Rachel Dinero, assistant professor of psychology at Cazenovia College, encouraged all her students to submit their research projects for presentation at the conference. She says that ten of her 19 seniors chose to collect data for their capstone projects and the seven who submitted their research were all invited to present their findings. At the conference, she says, "They each spoke knowledgeably about their work and had a great deal of interest from student and faculty conference attendees. I think the individual attention these students receive in both the Research Methods and Capstone classes facilitates their success with independent research. I am extremely passionate about research and make every effort to encourage students to conduct their own research."

Cariello agrees that the high number of acceptances for Cazenovia College students is "because we have such a unique, hands-on psychology department." All Cazenovia College students are required to complete the capstone course, and the College supports their research efforts. She says, "The majority of students I talked to at the conference who wanted to do research and run a lab study needed to find someone to support them all on their own. Cazenovia builds the process right into the curriculum, providing psychology students with an advantage - an introduction to conducting research and creating and executing their own study. I presented my research poster with a group that consisted mostly of graduate students and faculty members from other schools, which was both overwhelming and exciting. One highlighting moment for me was having someone come up, compliment my research and say, 'Wow you did all this and you're only an undergrad?' It was both rewarding and humbling."

There were more than 100 posters presented by students and faculty from colleges and universities in the eastern United States. Conference attendees roamed the corridors of the exhibition room to study the posters and ask questions of the researchers. The knowledge that she would be presenting with graduate students and professionals made Cariello a little nervous about her presentation.

"Their research seemed so much more advanced and intimidating than mine," she says. "To manage my anxiety I made sure I was prepared the night before and got up early to walk a few laps. I reminded myself that 'this is my own research and I know it inside and out, so there was nothing to fear.' It also helped to have the support of my friends, parents, and my professor, Dr. Dinero.

Cariello's interest in psychology began in high school, but when she started at Cazenovia College she wasn't sure she wanted to make it a career. She says, "By my junior year, when I had to declare a major, my advisor kindly pointed out that the majority of classes I had taken were in the psychology field and maybe I should consider declaring psychology as my major."

Lacrosse is Cariello's other passion. She says, "I started playing my freshman year of high school and fell in love with the game. It's major part of my life and I knew two things that I wanted from my college: I wanted to be a name, not to be a number, and I wanted to play lacrosse. Cazenovia has been the perfect fit for me."

This year Cariello was named a co-captain of the Wildcats Lacrosse Team after being a defensive starter since her first year on the team. She says, "Lacrosse is my escape – stress or problems just fade away when I pick up my stick. I can just get in the zone and focus on the game." Now in her final year of playing Division III lacrosse, Cariello doesn't want to give up the game.

She says that her knowledge of psychology has become part of her lacrosse performance. "It's part of my responsibility as captain to establish and maintain team chemistry and camaraderie. I've made myself available to the girls since day one, letting them know that they can come to me in confidence with any issues bothering them," she says.

She is also a master student for the Positive Psychology seminar, where two of her teammates are students. She says, "I proposed bringing positive psychology to our team. The girls were thrilled with the challenge and now we start off every practice with everyone saying something good that happened to them that day. It really boosts morale and puts them in a good mood, plus it's so rewarding to see the girls genuinely proud of each other's accomplishments and achievements. We've even got our coaches involved."

Cariello says, "Being part of the team, and now being a captain, means I need to have dedication, commitment and responsibilities. Our coach, Lauren Pacelli, reminds us that we are student-athletes; academics come first, lacrosse comes second. That's always stuck with me and has motivated me to stay on top of my course work so I can continue to play the game I love."

Although graduate study is in her future, Cariello plans to travel and work for a while before she takes the next step toward her future. "Lacrosse will continue to be a part of my life," she says. "I've even helped coach lacrosse at my high school, Burke Catholic, a few times. What I'd really like to do is start a league so that I can continue to play even after graduation."

When she considers her future, Cariello says that sport psychology would allow her to incorporate her two passions, and as a lacrosse coach her psychology background would help her understand, motivate, and improve her players. She says, "My favorite aspect of psychology is that it's so diverse. It can be broad or highly specific; you can literally apply it to any field."