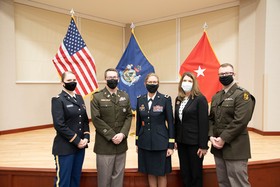 "It is my distinct honor and privilege to honor the two newest Army officers today as they embark on their careers," said Dunn. "We are all here to celebrate their accomplishments and support them as they make this commitment and sacrifice to our state and nation."

Byers graduated from Hermon High School in 2016, enlisting in the Maine Army National Guard as a radio operator while also enrolling at the University of Maine. During his time in ROTC, Byers has served as the battalion color sergeant, as well as battalion adjutant. Byers is receiving a bachelor's degree in history, minoring in leadership studies and military science, as well as a master's degree in global policy. He received an active duty commission as a military intelligence officer.

Griffin was born in Glendale, Ariz. and grew up in Jackman, Maine. After graduating from Forest Hills Consolidated School in 2017, she enlisted into the Maine Army National Guard as a chemical, biological and radiological specialist and entered the University of Maine in the fall of 2017, pursuing a degree in athletic training. While in ROTC she participated in Ranger Challenge and served as the battalion sergeant major. Griffin is receiving a bachelor's degree in athletic training with a minor in military science and leadership. She commissioned into the Maine Army National Guard as an ordnance officer.

"Being a simultaneous membership program cadet in ROTC has been a great learning experience," said Griffin. "This program has helped me learn what it takes to be a successful leader in a unit. Being a part of the planning process while still learning the ropes is a great foundation for a hands-on, real life application experience."

"Do not lose faith when the task is new or challenging," Dunn continued. "Reach back into the chapters of your training, coaching and mentorship and pull that learning forward into the new opportunities...You are not alone, ever, and asking for help is a strength not a weakness."

After taking the oath, Griffin and Byers' were pinned with their new rank insignia and received their first salute, a tradition for commissioning ceremonies. Byers received his first salute from Sgt. Gabe Bradley, a friend whom he previously served with on funeral honors duty. Griffin received her first salute from her grandfather, former Spc. Joe Taylor.

"I pray you both have the greatest and most fulfilling careers and that you look back on today many years from now and smile as you reflect on how you filled in each chapter of your story," Dunn concluded. "God bless you, and God bless America."

6: 2nd Lt. Ryan Byers presents flowers to his family during the ceremony.