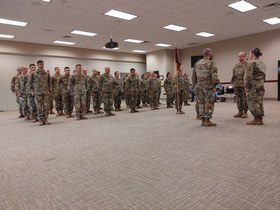 BANGOR, MAINE (05/31/2022) (readMedia)-- On Saturday, May 7, the Maine Army National Guard Medical Readiness Unit (MRU) held a change of command ceremony at the 240th Regional Training Institute in which Lt. Col. Jonathan Bausman handed over command of the detachment to Capt. Frederick Looper.

"The medical readiness unit has the amazing opportunity to interact with every soldier in the Maine Army National Guard," said Bausman. "I've been impressed with the unit's professionalism and hard work as we complete our mission of maintaining a medically ready force and prepare units for deployments and other missions. I'm proud of our unit and the flexibility and adaptability during the COVID pandemic. I was privileged to oversee very dynamic training events during my time as commander and I'm excited to see our unit continue to provide high quality care to soldiers."

Bausman was presented with the Meritorious Service Medal for his command tour, which included maintaining readiness of the MRU during the COVID-19 pandemic and adapting programs and practices to continue the unit's support to the field during domestic response.

"I am looking forward to the next few years as commander of the MRU and continuing our mission to provide a medically ready force to the state and nation," said Looper. "Efforts will be to continue to streamline the medical readiness process while improving the quality and consistency of the periodic health assessment process. Additionally, I would like to see the MRU increase efforts in providing medical training and education support to all the medics in the state, as well as providing medical planning and operations support to units of the Maine Army National Guard."

"Congratulations to both Lt. Col. Bausman and Capt. Looper," said Maj. Gen. Douglas Farnham, Maine's adjutant general. "The Maine National Guard has been blessed with some outstanding medical professionals who excel not only in their technical fields, but also in leading their peers and taking care of soldiers and airmen. My sincere thanks to everyone in MRU and their counterparts on the Air guard side, whose candid advice and support played a significant role not only in managing health policy changes for the force, but also in planning and supporting vaccination and testing sites across Maine these past two years."

Commissioned in 2007, Bausman attended medical school at the University of New England College of Osteopathic Medicine, graduating in 2009. He completed his pediatric residency at Geisinger Medical Center in Pennsylvania, during which time he drilled with the Pennsylvania Army National Guard.

Since returning to Maine in 2012, Bausman has practiced at Central Maine Medical Center, the Barbara Bush Children's Hospital, and is currently a general pediatrician at Intermed Pediatrics in Yarmouth. He and his wife Judy live in Auburn with their children, Rod and Rebecca.

Looper originally enlisted into the U.S. Army in 1989 as a medical specialist and later attended flight medic training before serving four years in Fort Carson, Colorado, both in a hospital environment as well as with the 571st Medical Company, an air ambulance unit.

Looper left the service after his active tour, and then later reenlisted in the Maine Army National Guard as a combat medic in 2002, deploying to both Iraq and Afghanistan with Brewer's B Company, 3rd Battalion, 172nd Infantry Regiment (Mountain). He went on to complete his nursing degree at the University of Southern Maine and commissioned into the Nurse Corps in 2012. Currently an emergency room nurse at Portland's Mercy Hospital, Looper resides in Wells with his wife Kerry, daughter Kayla, and son Indigo.

image4: Soldiers of the MRU stand in formation during the change of command ceremony.