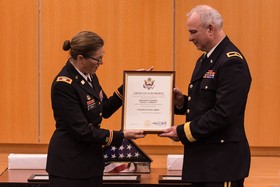 AUGUSTA, MAINE (03/02/2019) (readMedia)-- The Adjutant General for Maine, Maj. Gen. Douglas A. Farnham, recognized Brig. Gen. Hugh T. Corbett in a retirement ceremony attended by family, friends and National Guard members. Corbett has been assigned as the Assistant Adjutant General-Army since September of 2015. The Assistant Adjutant General-Army is responsible for all training, manning and equipping of the force in order to ensure operational requirements and readiness goals are properly met. Corbett began his military career with the United States Marine Corps in 1986 after completing Officer Candidate School in Quantico, Virginia. He later joined the Maine Army National Guard in 1993 where he spent the majority of his service as a staff judge advocate and also deployed to Afghanistan with Headquarters and Headquarters Company, 240th Engineer Group in 2006. Corbett previously served for three years as deputy commissioner for the Department of Defense, Veterans and Emergency Management and practiced law in Waterville from 1991-2002. In his comments, Corbett thanked his wife, family and friends for all their support during his career and command tour, to include his son who is currently serving overseas. He spoke fondly of many Soldiers he has served with, and noted how the Army values of loyalty, duty, respect, selfless service, honor, integrity and personal courage guided him throughout his legal and military careers. Corbett holds a law degree from the Vermont School of Law and a bachelor's degree from Colgate University. He also received a master's degree in strategic studies from the Army War College in Carlisle, Pennsylvania. Corbett's awards and decorations include the Bronze Star Medal, Army Commendation Medal, and Army Achievement Medal.
Posted Saturday March 02, 2019 at 07:17 pm by Maine National Guard