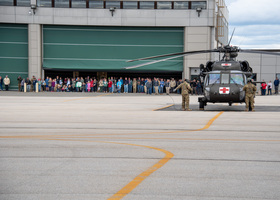 Gov. LePage offered words of comfort to both the deploying soldiers and their families:

"Soldiers of Company G; I want you to stay focused on your mission overseas," LePage said. "I want you to be safe, and to take comfort that all of us back home, including the first lady and I, will be looking out for your families while you are performing your duties."

Company G will be deploying later this spring to Afghanistan for approximately one year. The unit is an Aeromedical Evacuation (MEDEVAC) company that provides emergency enroute patient care, and movement of medical personnel and medical supplies in a theater of operations. The unit includes Soldiers from Maine, Washington DC and Idaho.

"I am confident that your leadership will create the conditions to succeed," said Brig. Gen. Hugh Corbett, Assistant Adjutant General for the Maine Army National Guard. "Both are seasoned leaders. Both have multiple deployments under their belt and both understand their incredible responsibilities".

The unit has deployed multiple times in its history, to Germany in support of Desert Storm, Guatemala, Bosnia, Kuwait and Iraq. It has also mobilized for stateside emergencies such as providing assistance to Louisiana after hurricane Katrina.