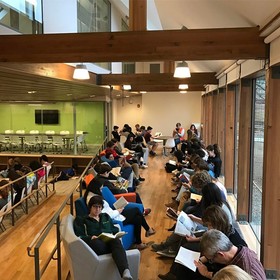 LENOX, MA (03/27/2017) (readMedia)-- STOCKBRIDGE, MA (3/27/17) – On Friday, April 7, a standing-room audience will gather at Berkshire Country Day School ("BCD") to celebrate the successful completion of Fulfilling the Promise: The Capital Campaign for BCD, as well as the opening of two exciting new spaces: the Kevin Hirt Library and Learning Commons and the Kim and James Taylor Music/Performance Room.

The April 7 party marks the completion of the School's first formal Capital Campaign in decades. The Capital Campaign was publicly launched in December 2015 with a $3 million goal to support the facilities upgrade and strengthen the School's Endowment. Before an audience of 200 current and former parents, alumni, faculty members, friends, and members of the community, Head of School Paul Lindenmaier will announce the total amount raised and the Campaign's achievements. He will also announce that the project was constructed without taking on debt.

BCD is a 71-year-old independent school that intentionally balances a comprehensive, challenging curriculum with the culture and spirit of the Berkshires. Its students, preschool through grade nine, come from throughout Berkshire and Columbia Counties.

Co-Chaired by Hilary Dunne Ferrone and Christopher Ferrone, and Hilary Somers Deely and Philip Deely '61, the Capital Campaign drew support from over 400 individual donors and community partners including Adams Community Bank, the Jane and Jack Fitzpatrick Trust, and the Feigenbaum Foundation.

The facility upgrades were designed by Flansburgh Architects, constructed by Allegrone Construction, and overseen by Colliers International. The new state-of-the-art learning commons and the dedicated music room dramatically transform Furey Hall, originally built in 1895 as a cow barn for Anson Phelps Stokes' Shadow Brook estate, which was later owned by Andrew Carnegie.

The Kevin Hirt Library and Learning Commons is an open-space multi-level learning hub that enhances BCD's intentional and independent curriculum. It is named for former BCD student Kevin Hirt '06, who died of a rare pediatric cancer at age 10. When he knew he would not survive, despite his courageous fight, Kevin asked his parents to donate his college fund money to help build a new library. His mother Lynn Campana said, "This library and learning commons is an amazing tribute to Kevin and his insatiable curiosity about the world around him. Kevin was an inspiration to so many people and we feel his legacy will live on here by inspiring students to explore, to be curious, to dream big, and to enjoy the simple pleasure of a good book." A large number of Kevin's family, friends, and classmates will be in attendance on April 7.

The Kim and James Taylor Music/Performance Room is a dedicated music classroom and performance space designed to foster musical creativity and experimentation for all students. Members of the Berkshire community will also be able to hold performances and events on the Adams Community Bank Stage, which can host an audience of up to 100 guests. The Taylors, whose twin boys graduated from BCD in 2016, are enthusiastic supporters of the School and served as the Capital Campaign's Honorary Co-Chairs. James Taylor said, "Nowhere will we hope to find the equal of BCD in heart, soul, and spirit. The Taylors will always be a BCD family."