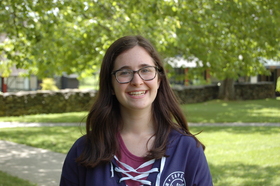 For two years, Shayna studied American Sign Language and made "Are you Listening?" as a way of giving back to the deaf community. "In a way, I was able to experience their culture, and I thought that I should give back," said Shayna. During this project, Shayna engaged the Berkshire Country Day School Kindergarten class in a year-long study of sign language. "The Kindergarten class is adorable and I love them, and I thought this could influence them, so that when they are older they may be inspired to also work with the deaf community," she said. Shayna is the daughter of Dr. Herb Kantor and Dr. Lisa Kantor.

This is the fourth year of the IWitness challenge and the fourth year that history teacher Sarah Pitcher-Hoffman's eighth grade students entered and placed as finalists, an impressive feat as many contestants are high school students. Of the eighth grade class's participation, Pitcher-Hoffman said, "The IWitness project has become an integral part of the eighth grade curriculum; first because of its connection to the Holocaust, which the students study in both seventh and ninth grades and second, because of its connection to service." This project supports one of Berkshire Country Day School's core values: citizenship, as the School guides students to become ethical, engaged, and informed global citizens.

Berkshire Country Day School students work hard and benefit tremendously from the IWitness project. "I see my students grow each year while working on this project," said Pitcher-Hoffman, adding, "I am so proud of Shayna and the fact that she was able to connect an interest of hers - sign language - with this project. I love how she connected the testimony, the adults in her community and the kindergarten students." Upon learning of her win, Shayna said, "I am pretty surprised and also grateful that I had the chance to do this."

Eighth Grader Jasmine Light distinguished herself by becoming a national 2017 finalist with her video "Knowledge is Power." Jasmine sought to empower others in her community through access to literacy and learning, collecting over 900 books to donate to Berkshire County Kids' Place and Violence Prevention Center. Former BCD finalists include Ruby Merritt '15, Ayva Schiff '15, Sam Ferrone '16, and Lanna Knoll '17.

IWitness is an educational website developed by USC Shoah Foundation – The Institute for Visual History and Education that provides access to nearly 1,300 full-life histories, testimonies from survivors and witnesses to the Holocaust and other genocides for guided exploration. IWitness Video Challenge asks students to submit short videos to show how they were inspired by testimony to make positive choices and create value in their community. The contest is open to middle and high school students across the United States and Canada. Inspired by the testimonies of Holocaust survivors, the activities are designed to be participatory, academic, and student-driven.

BCD is a 71-year-old independent day school that intentionally balances a comprehensive, challenging curriculum with the culture and spirit of the Berkshires. The preschool through grade nine school serves families in the Berkshire and Columbia counties and will expand in the fall to include a new 2 year-old program.

Berkshire Country Day School, an independent school for students in preschool through ninth grade, exists to inspire the individual promise of every student so that each may become an exemplary citizen of the world. More information about BCD can be found at berkshirecountryday.org