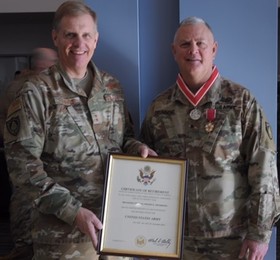 "It's hard not get emotional after everything that's happened over the last 37 years," said Drummond, who has been serving as director of joint staff since 2016. "I really feel like this journey just started."

Drummond praised his wife, Brenda, and his children, Kiley and Chase, for all the support they have given him throughout his military career. He was particularly thankful that his father, Phil Drummond, 87, was present for the occasion. He also thanked everyone in uniform, past and present, that worked with him and supported him during his career. A certificate and flowers were presented to Brenda and Kiley, recognizing them for their support.

Enlisting as a maintenance supply clerk in 1983, Drummond rose through the ranks to staff sergeant, then commissioned as a second lieutenant in 1990 through officer candidate school. He commanded the former Charlie Company of the 133rd Engineer Battalion, later served as the executive officer and the battalion commander of the 133rd, and also commanded at the brigade level at the 52nd Troop Command in Augusta. His time as the executive officer for the 133rd Engineer Battalion included a deployment to Iraq.

During his time as director of joint staff, the Maine National Guard made great strides in its international programs, particularly with the organization's relationship with Montenegro, Maine's partner through the U.S. State Department's State Partnership Program. In June 2017, Montenegro officially joined NATO.

Drummond concluded his remarks by encouraging service members to join and support veteran organizations, both as a way of thanking them for the support they give the current generation, but also as a way to remain connected to the military community.

"Remember, when someone comes up to you and thanks you for your service, part of that is because of the legacy that they [veterans] built – it's the uniform," he said, referencing veterans' past service and highlighting how they "paved the way" for today's service members.

Prior to his promotion to brigadier general in 2016, Drummond retired as a full time federal technician for the Maine Army National Guard after having served for 24 years in the directorate of facilities and engineering. In addition to the Legion of Merit, his awards include the Bronze Star and Meritorious Service Medal with Oak Leaf Cluster.