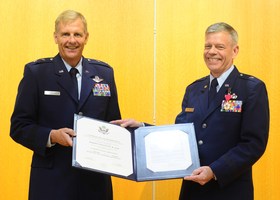 The Adjutant General for Maine, Maj. Gen. Douglas A. Farnham, was the presiding officer of the ceremony. Lind was awarded the Legion of Merit and presented with a U.S. flag flown over the Capitol in honor of Lind's military career. Lind also received a certificate of appreciation from the U.S. Air Force Chief of Staff and Director of the Air National Guard.

"It has been an honor to work with Eric in various capacities over the years," said Farnham. "His dedication and commitment to the women and men of the Maine National Guard is commendable. He has been an outstanding leader throughout his career and he will be sincerely missed."

Lind thanked his family and many friends who were in attendance. He presented his wife, Sandy, with the Spouse Medal and Certificate of Appreciation for her support throughout his career. He also thanked his sons and fellow service members for their unwavering support.

"I owe my family and everyone I have ever served with a debt of gratitude," said Lind. "Thank you for working so hard with me over the years. It has been an honor and a privilege."

Lind enlisted in the Air Force on active duty in 1980 and also served as an enlisted member in the Maine Army and Air National Guard. He was commissioned through the Academy of Military Science in 1991 and has held numerous positions within the Maine Air National Guard, including executive officer, state human resources officer, and director of the joint staff. He is also on the board of directors at the Kennebec Valley United Way and the Augusta Food Bank, and he is a city councilor for Augusta.