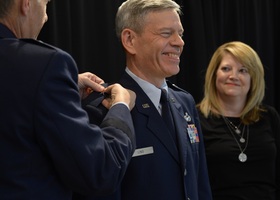 AUGUSTA, ME (12/01/2017) (readMedia)-- Augusta, Maine – Brig. Gen. Douglas A. Farnham resided over the promotion of Col. Eric W. Lind to the rank of brigadier general and appointed him the Assistant Adjutant General for the Maine Air National Guard during a small ceremony at Le Club Calumet today.

Lind is an Augusta native, who enlisted in the in the Air Force in 1980 and has served in both the Maine Army and Air National Guard. He earned his Air Force officer commission through the Academy of Military Science in 1991. He holds Bachelor of Science in Business Management from the University of Maine in Augusta. His military education includes Squadron Officer School, Air Command and Staff College and the Air War College.

Lind is an avid volunteer, serving in numerous organizations within the Augusta community. He is a board member at the Kennebec Valley United Way and the Augusta Food Bank. Most recently, Lind was elected to serve on the Augusta City Council starting this January.

"I am thankful to our Adjutant General, General Doug Farnham, for this opportunity," said Lind. "He is great to work with, a terrific leader and a person of character."

Lind was surrounded by friends, family and military colleagues both past and present.

"I am grateful for my family and the support they have provided me over the years. There are no words to describe the love and respect I have for my wife and family."