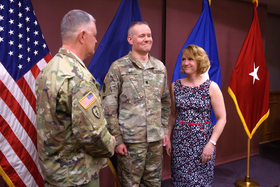 Lewis is a combat veteran having served in Iraq and Afghanistan with the 133rd Engineer Battalion.

"Scott represents the best in us," said Drummond. "Words like professionalism, loyalty, outstanding officer and Soldier describe him. You can learn a lot about an individual from the way they treat subordinates, and Scott is as professional and personable as they come".

"I am fortunate," said Lewis. "I have the luxury of serving with the less than 1% of the population who wear the uniform".