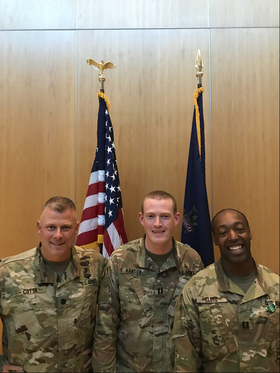 "The 133rd Engineer Battalion recognizes Capt. Christopher Lloyd's superior leadership and he was awarded an Army Commendation Medal," said Lt. Col. Shanon Cotta, the battalion commander of the 133rd. "As the company commander, he cared deeply for Maine soldiers and their families. We extend a warm welcome to Capt. Hanson as he assumes command and have every confidence in him as he leads HHC forward."

Lloyd is a Boston, Massachusetts native and enlisted in 2006 into the 136th Engineer Company before receiving his commission in 2012 from the University of Maine ROTC Program. He has served in multiple platoon leadership roles within the 133rd Engineer Battalion, with exercise rotations to both the Joint Readiness Training Center and the National Training Center. Prior assignments also include executive officer of the 136th Engineer Company and a battle captain in the 133rd's operations section. Lloyd resides in Gorham, Maine with his wife Stephanie, and two sons Isaiah and Joshua.

Hanson is a native of Hampden, Maine and received his commission from the United States Infantry School's Officer Candidate School. As a second lieutenant, he was assigned to the 251st Engineer Company (Sapper) in Norway, Maine where he served as a platoon leader. Later, Hanson served as the assistant S-2 intelligence officer for the 133rd Engineer Battalion, as a platoon leader for the 262nd and 136th Engineer Companies, and a plans officer for the133rd Engineer Battalion. Hanson resides in Bar Harbor, Maine with his fiancé, Kayla.