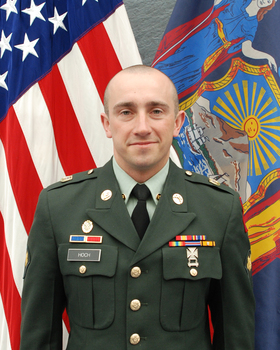 Specialist William Hoch, a 26-year old student at Medaille College, and a member of the 105th Military Police Company, was picked as the best junior enlisted Soldier in the 10,600-member New York Army National Guard.

"He is among best and the brightest," said New York National Guard Command Sgt. Major Robert Van Pelt. "Specialist Hoch exemplifies the high standards we expect of our National Guard Soldiers and he will do well as a future leader in f the New York Army National Guard," he added.

Hoch, a military policeman, joined the New York Army National Guard in 2008. His awards include the National Defense Service Medal, the Global War on Terrorism Service Medal, and the Army Physical Fitness Ribbon.

He was selected for the honor based on recommendations from his commanders, his performance on military skills that included his ability to operate the M203 grenade launcher and search vehicles, and an interview by a board of senior non-commissioned officers.

He has attended a perfect score of 300 on the Army Physical Fitness Test.