One of three winning cards designed by Newfane student 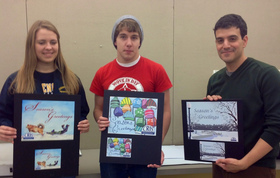 CAZENOVIA, NY (12/18/2012)(readMedia)-- Paul Roberts, of Newfane, N.Y., a junior visual communications major, was one of the students in Dan Salamida's Illustration Class at Cazenovia College who designed holiday cards for CRIS (Community Resources for Independent Seniors) to send to people who volunteer for the CRIS-CAT program, a transportation program in the Cazenovia, Nelson and Fenner areas for those over 55 who are no longer able to drive. CRIS-CAT has over 50 volunteer drivers who drive area residents to doctor's appointments, grocery shopping, hairdressing appointments and events. Roberts' design was one of three students whose card was chosen to be printed.

CRIS Director Bonnie Slocum said, "We sincerely appreciate the willingness of Laurie Selleck [professor of visual communications] to suggest this project to Dan Salamida for the Illustration students. The CRIS Board thoroughly enjoyed reviewing the submissions. Three cards will be produced from designs by Paul Roberts, Courtenay Chambers and Katie McCutcheon, and the winning students received Caz Bucks certificates to spend in Cazenovia stores."