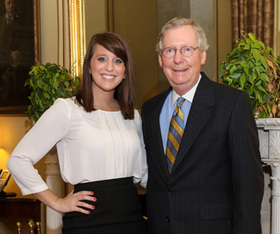 Caroline Snell, a Centre College junior, is shown here with Kentucky senator Mitch McConnell. She will be working for Kentucky Congressman Brett Guthrie for the remainder of the summer.

DANVILLE, KY (07/24/2013)(readMedia)--  Caroline Snell of Paris, a rising junior at Centre College, is spending the summer interning for Kentucky Senator Mitch McConnell and Congressman Brett Guthrie. A double major in government and history with a minor in international relations, Snell feels these Washington, D.C., experiences are the perfect fit for her career interests and her passions.

For the first part of the summer, Snell worked in McConnell's office, where her work centered on the Farm Bill; she researched legislation on agriculture, attended policy briefings and committee hearings and ran office errands.

Her favorite part of her time with McConnell's office was seeing how her education applied in the real world.

"As a government and history major, I learn relentlessly of the issues that affect our country, but from a classroom perspective, everything is distant," she explains. "This internship has allowed me to go beyond that. I explored our nation's capital, met national and international leaders and debated some of the most challenging political, social and economic issues facing our country."

Currently, Snell is working in Congressman Brett Guthrie's office, where she attends briefings with other staffers, sorts mail, researches legislation and attends seminars. This experience has given her a huge networking opportunity.

"In the short time I've been here, I've attended events featuring speakers such as Congressman Paul Ryan, House Majority Leader Eric Cantor, Speaker of the House John Boehner, Communications Strategist and Former Counselor to George Bush Ed Gillespie, political satirist Stephen Colbert and many other Congressmen," says Snell. "I was also given the opportunity to go over to the Supreme Court as they announced their decisions this summer. The Congressman and his staff have presented me with opportunities that I will never forget."

Snell is the daughter of Will and Amy Snell of Paris and is a graduate of Bourbon County High School.

Centre College, founded in 1819, is a nationally ranked liberal arts college in Danville, Ky. Centre hosted its second Vice Presidential Debate on 10.11.12, and remains the smallest college in the smallest town ever to host a general election debate.