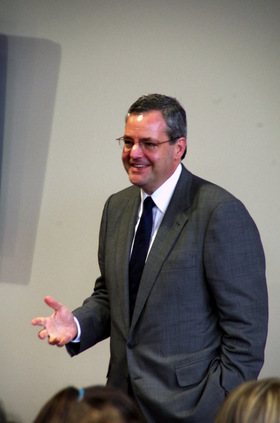 Donald J. Laackman, the next president of Champlain College. (photo by Stephen Mease)

Laackman (pronounced "Lock-man") and his wife, Allyson, were formally introduced to the campus community today by Champlain College Search Committee Chair and Trustee Scott Carpenter and Chair of the Board of Trustees Mary Powell. He will begin as President of Champlain College on July 1, 2014.

"I am thrilled with the selection of Donald Laackman as the next President of Champlain College. Our search attracted an unprecedented number of incredibly talented applicants, a tribute to the quality of the Champlain College experience. Don will bring incredible intellect, emotional engagement and vast professional experience to the role. I cannot think of a person who could better embody Champlain College's "radically pragmatic" approach to higher education," said Powell in making the announcement to the campus community.

The College enrolls 2,000 traditional undergraduate students in residence and 1,300 graduate and continuing professional studies students, primarily online. Residential students come from 39 states and 13 countries. A pioneer in online education, Champlain has been incorporating technology into its programs for two decades, providing its graduates with a competitive "edge" in the marketplace.

Laackman told the faculty, students and staff gathered at Alumni Auditorium that, "Higher Education is at a crossroads, with many families questioning the value of a college degree. Champlain College's approach to education is re-writing the rules. Champlain prepares students for careers today while giving them the skills to adapt to a rapidly changing job market. I am excited by the opportunity to lead this entrepreneurial, innovative College and to deliver on the promise of higher education to transform students' lives." He also cited a recent article about Champlain College in Atlantic magazine, describing it as the "Ideal College," for its comprehensive approach to education.

He has been president of Harold Washington College, one of the City Colleges of Chicago, since March 2011. Harold Washington College educates more than 13,000 students each year. Before his appointment, he was a principal at Civic Consulting Alliance, where he managed workforce and education programs that included improving career and technical education for 25,000 high school students in Chicago public schools. He was also a managing director at Accenture, a global technology, consulting and outsourcing firm.

Laackman received his bachelor's degree from the University of Chicago and a Masters of Public Policy from the Harris School of Public Policy at the University of Chicago. Laackman is married to Allyson Laackman, vice president for finance and administration and chief financial officer for the Museum of Science and Industry in Chicago. They have two children, Donald and Emily.

"Champlain's entrepreneurial faculty and nimble approach to programs enable the College to rapidly adapt to the job market," Laackman said, adding "Students get early education in their chosen career field. At the same time, Champlain is preparing students with the soft skills necessary to succeed in careers. I am humbled and excited to lead Champlain College."

"Don's extensive business experience will help further Champlain's work in providing an outstanding academic experience that is directly connected to developing high functioning members of society. The Board will be forever grateful to David Finney, whose leadership was critical to get Champlain College to the high level of performance and national recognition it has received to date," Powell added. Finney became the seventh president of Champlain College on July 1, 2005.

Champlain President Finney added his endorsement to the Board's choice, "My decision to retire after nine years stems from my belief that the College has much to gain from the energy and vision that will accompany a new president. I know that the skills, depth of experience, and leadership Don Laackman will bring to Champlain will build on the great momentum and innovative programs developed during my time here," Finney said.

Champlain College began its search for its eighth president in April 2013 after President Finney announced plans to retire on June 30, 2014. A national search for his replacement commenced with assistance from executive search firm, Storbeck, Pimentel & Associates. The Presidential Search Committee, consisting of eight trustees and leadership representatives from faculty, staff and student government narrowed a pool of more than 100 candidates down to four, and brought those finalists to campus in November and early December for interviews and meetings with stakeholders on campus.

The Presidential Search Committee recommended Laackman to the Board of Trustees during a Special Meeting of the Board on Thursday, Dec. 19 at which time Laackman was selected as President-Elect.

"I can't thank the search committee enough for their hard work and inclusive process to choose the next leader of Champlain. The voices and opinions of students, faculty, staff, alumni and community members all played a vital role in this decision," said Carpenter, who chaired the committee.

Champlain's distinctive educational approach embodies the notion that true learning only occurs when information and experience come together to create knowledge. Champlain offers traditional undergraduate and online undergraduate courses, along with online certificate and degree programs and eight master's degree programs. Champlain offers study abroad programs at its campuses in Montreal, Quebec and Dublin, Ireland. Champlain College is included in the Princeton Review's The Best 378 Colleges: 2014 Edition. Champlain was named a "Top-Up-and-Coming School" by U.S. News & World Report's America's Best Colleges and is ranked in the top tier of 2013 Regional Colleges in the North. For more information, visit www.champlain.edu

Before his appointment, Laackman was a principal at Civic Consulting Alliance, where he managed Civic Consulting's workforce and education program areas. He had participated in several workforce system change initiatives, including the creation of a new workforce board overseeing $360 million in workforce funding in Chicago, a strategy for improving career and technical education for 25,000 high school students in Chicago public schools, and the launch of City Colleges' Reinvention initiative.

Laackman previously served as a managing director at Accenture, a global technology, consulting, and outsourcing firm. Over a 23-year career, he worked with clients to develop and implement strategic, change, and information technology solution initiatives.

Laackman received his AB in politics, economics, rhetoric, and law and a master in public policy from the University of Chicago. He now serves on the Visiting Committee of the Harris School of Public Policy Studies at the University of Chicago. He is the chairman of the board for Genesys Works, a nonprofit that provides technology training and finds jobs for high school students in Chicago Public Schools.

Laackman is married to Allyson Laackman, vice president for finance and administration and chief financial officer for the Museum of Science and Industry. They have two children, Donald and Emily.

Champlain College has had many distinguished leaders since it was founded in 1878:

The Search Committee includes representatives from 2013 Board of Trustees, the student body, staff, and faculty.

• Katie Hawley, Vice President and Secretary of the Corporation

Biography of President David F. Finney (On the web)