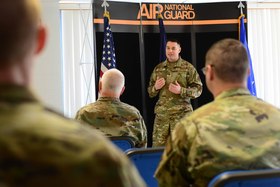 Westin, of New Gloucester, has 14 years of military service spanning eight years on active duty and six years with the 265th. He previously served as 265th's Detachment Commander and was recently the commander of the 41st Air Expeditionary Mission Support Group during an international readiness exercise with the North American Aerospace Defense Command (NORAD). Westin is expected to be promoted to the rank of lieutenant colonel as the commander.

"It is an honor for me to take the helm of such an outstanding unit," said Westin. "What makes the 265th exceptional is the expertise and camaraderie of our Airmen. I want to thank Lt. Col. Camire for his leadership and support to our men and women during his remarkable career here – he's been a true professional and he has done so much for all of us."

Camire, of Poland Springs, enlisted in the Maine Air National Guard in 1994 and was commissioned in 2004 when he joined the 265th. He began his command in 2016. He participated in numerous deployments including two to Afghanistan. He will be taking the position of Director of Staff for the Joint Force Headquarters at Camp Chamberlain in Augusta with an expected promotion to colonel in the near future.

"For the past six years I've had the incredible gift of working for the men and women of the 265th," said Camire. "I would like to think the unit has improved over my time here, but in all honesty, it is difficult to improve upon perfection and that speaks volumes to the commitment and dedication of our Airmen."

The ceremony included the passing of the squadron's guidon from the outgoing commander, Camire, to the incoming commander, Westin. Both spoke to the unit and guest speakers included Brig. Gen. Steven Michaud, Commander of the Maine Air National Guard.

"It's always is exciting to take command, especially when you are so familiar with the unit," said Michaud. "Brian and Brenden are great officers and we are looking forward to what the future holds for both of them in their service to the Maine Air National Guard."

The mission of the 265th Combat Communications Squadron is to train members in the use of existing and future communications technologies. This award-winning unit deploys, operates, and maintains strategic emergency communications anywhere in the world in both peacetime and combat environments. Recent deployments include Kenya, Iraq, United Arab Emirates, Kuwait, Bahrain, Iraq, Afghanistan, Qatar, and Niger.

20220306-Z-XE741-006: Lt. Col. Brian Camire, outgoing commander of the Maine Air National Guard's 265th Combat Communications Squadron, stands at attention during the National Anthem during the units change of command ceremony in South Portland. Camire, of Poland Springs, has commanded the 265th since May 2016 and relinquished command to Maj. Brenden Westin, of New Gloucester, during the ceremony on March 6, 2022. (Maine Air National Guard photo by Master Sgt. Travis Hill)