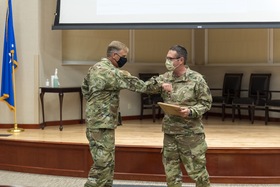 BANGOR, MAINE (05/29/2020) (readMedia)-- Gen. Joseph Lengyel, chief of the National Guard Bureau, visited Maine on May 27, 2020, to meet with soldiers and airmen and observe how the Maine National Guard is supporting its state and federal missions.

During his visit, Lengyel had the opportunity to observe a local PPE fit-testing mission, one of the most frequent requests of the Maine National Guard during the COVID-19 response. Over 1,500 congregate care workers have been fit-tested since the first request in April, and many more are set to follow.

The general presented several coins to soldiers and airmen who through their hard work and dedication, have had significant impact on supporting the federal mission and ensuring an effective state response to COVID-19.

Lengyel praised the 54 states and territories for their innovation in determining how to best employ their National Guard assets, and then sharing those solutions nationally to maximize collaboration.

"We provide a special product to our governors," said Lengyel. "We have the skill sets inside the National Guard to take on any task. So even though a special unit may be infantry or signals, or whatever it may be - air refueling from an air refueling wing - we're able to use all the leadership and all the special skills of all the people that are in those formations and apply them to whatever problem set needs to be solved. Who would have thought we'd be fitting masks to people in a community to make sure that they're safe in a COVID environment? It's a great example of how here in Maine the National Guard is used to keep people safe."

Before his departure, Lengyel met with Maine National Guard senior leaders to discuss the state and national pandemic responses, lessons learned, and the long term effects of the current operation on the National Guard.

With all the responsibilities that come with his position, the best part he says, is still meeting with those that choose to wear the uniform.

"No one knows what the uniform is going to ask of them when they put it on for the very first time," said Lengyel. "But to be with the men and women of the National Guard that agree to write that blank check to the United States of America, or to the states that we're from, it's a special crowd, and I will miss that the most when I'm no longer the chief."

In addition to the below YouTube link, the video version of this story may be viewed or downloaded here:

9898 - Maj. Gen. Douglas Farnham, Maine's adjutant general and commissioner of the Department of Defense, Veterans and Emergency Management, exchanges an elbow bump with Gen. Joseph Lengyel, chief of the National Guard Bureau. Lengyel visited Maine May 27, 2020, to meet with soldiers and airmen, and observe how the Maine National Guard is supporting its state and federal missions.

9667 - Gen. Joseph Lengyel, chief of the National Guard Bureau, observes a PPE fit testing mission as part of his May 27, 2020 visit to Bangor. Fit test requests have become one of the Maine National Guard's most visible contributions to the local COVID-19 response.

9839 - Staff Sgt. Orie Bartlett exchanges an elbow bump with Gen. Joseph Lengyel after receiving a challenge coin at the 240th Regional Training Institute in Bangor on May 27, 2020. Bartlett was one of several soldiers and airmen to be recognized by the general for their contributions and accomplishments supporting both the Maine National Guard's federal mission, as well as the local COVID response.

9064 - Gen. Joseph Lengyel, chief of the National Guard Bureau, addresses a formation of airmen at the 101st Air Refueling Wing in Bangor May 27, 2020. Lengyel paid a visit to Maine to meet with soldiers and airmen, and observe how the Maine National Guard is supporting its federal and state missions.

9878 - Col. Frank Roy, left, commander of the 101st Air Refueling Wing, briefs Gen. Joseph Lengyel on the 101st's recent missions in support of homeland defense during the general's visit to the 240th Regional Training Institute in Bangor, May 27, 2020.