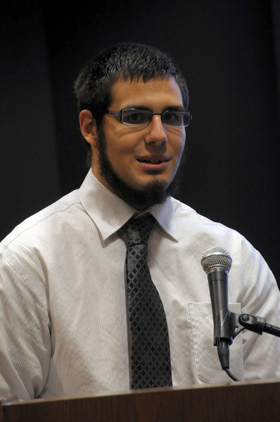 CHESTERTOWN, MD (10/23/2012)(readMedia)--  Washington College is pleased to announce that Chuck Weisenberger '12 of Nazareth, PA has completed his work as a Comegys Bight Fellow. Presented by the College's C.V. Starr Center for the Study of the American Experience, the Comegys Bight Fellowship Program offers stipends to support summer internships at some of the nation's leading historical and cultural institutions. These paid internships annually provide a handful of students with high-level research experience on topics related to American history pre-1900.

Over the summer, Weisenberger worked at the Maryland State Archives, further pursuing research he began at the Maryland Historical Society, studying African-American Marylanders in the War of 1812. He also traveled to London with Maryland State Archivist Edward Papenfuse to delve into the British National Archives, seeking evidence of escaped slaves who joined the invading forces. Weisenberger presented his findings at a special program on campus on October 15th.

Founded in 1782 under the patronage of George Washington, Washington College is a private, independent college of liberal arts and sciences located in colonial Chestertown on Maryland's Eastern Shore.